Welcome to the inaugural Biography Buzz! This will be a monthly posting reaching into the lives of some notable people. All of 2020 I will be digging into the experiences of suffragists to commemorate the 100th anniversary of the passing of the 19th Amendment, giving women the right to vote. This month, I picked something extra fun to send the year off in style.

To those of you that already know, buckle up buttercup. To the rest of you, allow me the pleasure of introducing one of the stars from Netflix’s Queer Eye, the ever-perky and optimistic Jonathan Van Ness! Now, four of the five stars of the show have written biographies (fingers crossed waiting for you Bobby!) and I have enjoyed Every. Single. One. These men personify so many positive traits of humanity. Their tendencies to eschew toxic masculinity and help their heroes, who are what they call the people they help on each episode, is just so admirable and it has been amazing to learn how each became the wonderful individuals we see today. On to our current star! JVN.

**Trigger warnings, mentions of sexual abuse, drugs, and addiction both farther below and in the book**

Now, with the title Over The Top, you might think it’d be just that with a strong dose of superficial. Hold those horses though, because this book is filled with very real and quite relatable events that might even reduce the toughest of you to tears. He lays all his cards on the table and doesn’t hold anything back, not even the most personal of confessions. He starts by admitting the fear and apprehension he feels sharing his story. “If you knew all of me, you wouldn’t love me anymore . . . this book is my chance to show you more. It’s not gonna be pretty, but it’s my truth, and if I don’t share it, I won’t be able to help others who are struggs to func.” And it doesn’t stop there. Cute anecdotes are spattered throughout the confessions. One cannot help but be proud of the strength it took to talk about some of these topics.

Young JVN went by Jack as a child. Jack was endearingly obsessed with the Olympics, figure-skating and gymnastics in particular. Honestly though, who isn’t impressed with the abilities of those talented individuals?! Most people don’t have too many memories prior to maybe age ten or so. Jack has several to share however. Some adorable, snacking on Pop-tarts while watching weekend Olympics. Deciding that she wanted to either be a cabana girl or cosmotologist when she grew up. (Side note: JVN identifies as gender queer and interchanges pronouns during the book) Some devastating, being sexually abused at age 4 by an older child and it being summarily dismissed by adults as “experimenting” then forgotten when it was revealed. This huge hit to his sense of self-worth was to of course effect his behavior for decades.

Binging & purging and parent’s divorce notwithstanding, we make it to spring of eighth grade where Jack was dared to try out for junior varsity cheerleading. He was ready for the challenge. He put his everything into the tryout, and the time waiting for the results seem to take forever (aka three days.) Success!! She made it in to basketball cheerleading a few months later as well out of sheer will and determination. Going from “chubby and snaggle-toothed” to “swim-svelt” helped her to be able to accomplish this goal. As he said, “Making the squad made it not matter so much that I’d been bulled and that everyone called me a faggot. When I was flying though the air, for the first time, I belonged.”

Jack attended college in Tuscon fresh out of high school. Between failing out that first semester and the drug trifecta of maijuana, cocaine, and alcohol, he quickly found a pimp to help afford his lifestyle. Those months came to an end the day he faced a john with a gun in his hand, inside was he later found out was an active meth house. Scared, Jack returned home with emotional scars and a little kitten to show for his time in Tuscon. Stifled back in Quincy, she decided to attend hair school to realize her cosmetology dream. It was there that he started going by Jonathan.  From school in Minneapolis to a salon in Phoenix, her expertise grew as well as some of his problems.

After the ’08 recession and his grandma’s passing, he made the move out to LA where it was hard work gaining his hair clientele. Studying under some salon savants was a dream come true. He also found a long term relationship. This became an on again-off again thing as he lost him self in a sex addiction and rehab more than once. Bad decisions compounded into news that no one wants to hear. A Planned Parenthood STD panel revealed that he was HIV positive. Thankfully it’s no longer terminal, just chronic, and medical treatment has turned his illness into undetectable.

After rock bottom, the only way left to go is up. That’s exactly what our gal did. She started her own small salon and built it to expand to NYC. He made his way into our hearts as the lovable and most enthusiastic member of the Fab 5 on Queer Eye. Some of the final paragraphs the book contain my favorite lines. “We are never too broken to heal. …If you love and accept yourself all the way,  no matter what, through thick and thin, then either way you will make it through. … no matter how down you get, you can always make a gorgeous recovery.” 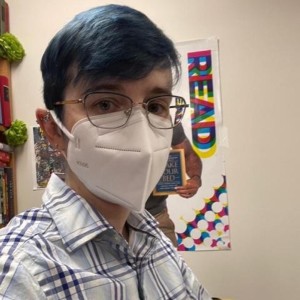