All Richmond Public Library locations are open beginning July 6, 2020. Visit our Reopening Page to learn more before your visit.

2018, what a great year for books! What year isn’t, really, but some years feel special. This year my personal list of favorites was 31 titles long. While I work on trimming that down, check out what our staff has to recommend for you to read. Maybe you should bring this list with you to the library to stock up for a looming snow day? Just a suggestion.

“When I started this novel I thought I would never finish it. First, because WWII plays a large part and I swore I would never read another WWII book until I had read a million books about other times and places. Second, to paraphrase Emperor Joseph II, the book obviously had too many words. And yet I was pulled page by page to the end by its originality, poignant humor, and literary grace.”

“[…] but Friday Black isn’t in yet, neither is John Boyne’s newest book [A Ladder to the Sky]– both I KNOW will get my best of for the year.”

(Ed: We’re always hungry for that next best read, aren’t we?)

Mary C. recommends: “My two favorite fiction books of 2018 are The Which Way Tree by Elizabeth Crook and Where the Crawdads Sing by Delia Owens.  The Which Way Tree is about a strong woman and the story is original and captivating.  The ending will leave you with a great big smile.  The Crawdads Sing is a true traditional Texas tale.  The writing is elegant and it is just a joy to read.  Written in the voice of a teen age boy who lives in the Texas Hill Country during the time of the Civil War.”

Tori N. recommends: “The Power is a clever, action packed quick read with magnificent imagery that explores the concept of power while tangentially exploring the role of gender in a unique way.  It asks you to consider your own personal threshold for a desired balance between these two constructs.

Robert Galbraith (aka J.K. Rowling) has taken on this new (to her) genre with her successful detective series, each one shining brighter than the other. Lethal White, her new fourth novel in the series in no exception. She deftly creates vivid new characters while deepening our understanding of the main character and takes you on a constantly turning journey to solve the multiple mysteries within its pages.  A delightful and intriguing read for anyone who loves mysteries!”

Nancy B. recommends: Patti Smith’s Devotion: Why I Write – “Smith shares memories from her life and then spins her impressions into a folk tale.”

There There by Tommy Orange – “I hope he will write again.  A story of urban Indians, belonging to the land, but strangers in it and often strangers to their own culture.” 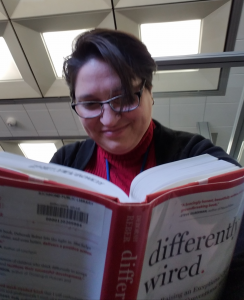 Heather M. recommends Differently Wired: Raising an Exceptional Child in a Conventional World by Deborah Reber. “This book presents a positive and proactive approach to parenting differently wired kids of all kinds. It complements Reber’s Tilt Parenting website and podcast series and provides amazing insights into how to support kids on the Autism spectrum, with ADHD, mental illness, learning differences, sensory processing issues, and more. It is also full of insights and supports to help their families thrive and is a link to a wealth of other resources. I didn’t want to turn it back in!”

“Bud Smith’s stories are about his years working construction at an oil refinery. He’s the apostle of the blue-collar world, giving insight and showing the beauty behind the regular. I’ve read reviews of people calling him the new Whitman, only married. And I would say that’s right on the nose.”

Celina W. recommends: “If we’re talking life-changing, mind-altering ways of seeing and interacting with the world as someone who is active within community and movement building work, my best read of 2018 would be Emergent Strategy: Shaping Change, Building Worlds by Adrienne Maree Brown.

I also can’t recommend Passing for Human: a graphic memoir by Liana Finck to enough people. I read it in one sitting and have re-read it several times since then. As I described it on my Instagram: ‘this is a beautifully written tale of creations, the beginnings of our stories and the beginnings that made those possible.’

And because people rarely talk about poetry; a friend recently gifted me with a copy of Horses Make a Landscape Look More Beautiful by Alice Walker. I’ve neglected to read her poetry prior to this, which is a strange oversight. It was published in 1984 and still resonates powerfully with me as a black woman who has had to do a lot of work to remain resilient, tender, and creative under white supremacy.” 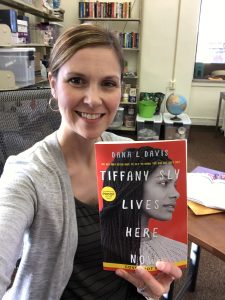 Jenn D recommends: “Tiffany Sly Lives Here Now by Dana L. Davis is the story of a teenage girl dealing with some pretty heavy stuff…anxiety, the death of her mother, moving to a new state with the father she’s never known.  Tiffany is not one of those steadfast characters that I can say bares it all with strength and dignity.  And, for that, I love her!  Tiffany is your typical 16 year-old who reacts as I imagine many 16 year-olds would.  She freaks out, she makes some bad decisions, she gets in some fights with family members.  Yet through it all, Tiffany remains witty, kind, insightful, and charming.  Dana Davis does an amazing job with Tiffany’s voice and as you read this book you will find yourself laughing out loud and routing for Tiffany all along the way.  Plus, there is basically no romance going on in this book which is sometimes hard to find in a contemporary YA and, in my opinion, makes it an A+ read.”

Patrick D. recommends: “It’s hard to pick just one, I could recommend loads, so I’ll pick two! The Girl Who Drank the Moon (Kelly Barnhill) and The Folk Keeper (Franny Billingsley). They have similar themes; childhood abandonment, girl discovering who she really is and that there was more power in her than she was told, the dangers of both deceit and love; and while they are both fantasy books one takes place in the real world and the other in a made-up place, in one magic is subtle and the other it’s glaring. One stresses the sacrifices made by the main character and the other stresses those made for the main character, but there an over-all theme of the power of altruism which I always appreciate in a story. It might be why I liked A Lesson Before Dying and Lincoln in the Bardo so much, despite being super sad, they are ultimately uplifting.

The Girl Who Drank the Moon

Just because you don’t see something doesn’t mean it isn’t there. Some of the most wonderful things in the world are invisible.

Laura P. recommends: “My best read for 2018 is a brief but powerful book called Illegal.  It is story of a young Ghanaian named Ebo, one of the millions of migrants who fled to Europe in 2015. Based on actual experiences of several migrants interviewed for the novel, it is a thought-provoking and inspirational work.”

“The title, On Desperate Ground, is taken from a description of a certain type of battleground in The Art of War by Sun Tzu.  Those three words of the title are a very accurate description of the Marine battle at the Chosin Reservoir in the Korean War.  Author Hampton Sides does justice to this history.  Another satisfying book by this same Memphis native is Blood and Thunder, an Epic of the American West.  Both books are histories of areas to the west of us, one near and one faraway. 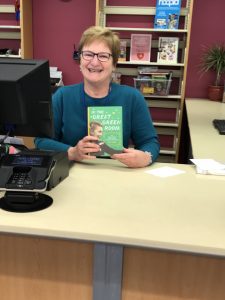 Barbara B. recommends: In the Great Green Room, The Brilliant and Bold Life of Margaret Wise Brown by Amy Gary

“I confess. I like to read nonfiction. Reading about real people and experiences satisfies a general curiosity that I have about life. I want to know what is true.

This fascinating biography captures the adventurous spirit of Margaret Wise Brown, a prolific writer of more than one hundred children’s books, poems and songs. Many of her titles, including Goodnight Moon and The Runaway Bunny, remain classics long after Brown’s untimely death in 1952. Many parents and teachers are familiar with Brown’s writings. However, few may be aware that this author was at the center of a publishing revolution. Brown was a rebel, an influential editor/publisher and a trailblazer in the 20th Century emerging field of children’s literature. Her writing style challenged both the educators and public librarians of her day. By sifting through many of Brown’s unpublished journals and letters, Amy Gary has been able to give us an intimate view into this author’s private and professional life. We learn that Brown enjoyed rabbit hunting, a wild imagination and living extravagantly off the royalties of her books. She had affairs with both men and women, the most famous being the ex-wife of John Barrymore.

This book discloses intriguing details of Brown’s book illustrations and highlights her unique efforts to combine her love of modernism and education. I recommend In the Great Green Room to anyone curious about the extraordinary life of Margaret Wise Brown and her life’s contribution to the literary world.”

Well, a few of my favorites also made my colleagues’ lists so I’m glad I waited. Since I recommended this twice on this blog since I read it in January, I feel like I have to mention The Restless by Gerty Dambury. A poignant and original novel about class and police violence in French Guadeloupe, structured like a Creole quadrille, translated from the french by Judith G. Miller. I have terrible recall, often fumbling around for generic descriptors when people ask why I liked a book, but I read this way back in January on an airplane and it stuck with me all year. A lesser known translation published by an indie press, this hasn’t gotten the airplay it deserves. I hope you’ll give it a chance.

I also want to recommend one of my most recent reads: A Ladder to the Sky by John Boyne.  If great artists steal, then Maurice Swift is one of the best. As a young man he makes a splash in the literary world by stealing and publishing the painful secret past of an admired older novelist, ruining his life in the process. What follows is a immensely pleasurable page turner.  It was so deliciously dark I could hardly stand it. And for anyone who enjoyed The Heart’s Invisible Furies, the brief appearance of Maude Avery was a real treat.

But wait! I let others have three so I’m going for it:  The House of Broken Angels by Luis Alberto Urrea was gorrrrrgeous and after reading it in one sitting, besides the leg cramps, it was like getting a hug from a book. Big Angel, who has just said goodbye to his 100 year old mother, is facing death himself. He invites the whole family to celebrate his last birthday, and the ensuing multi generational saga takes us back and forth through time, and through family lore, to a touching finale in the present. Luminous is overused in book descriptions but here it is certainly called for. Every sentence a joy to read, this is truly a great American novel.

I’d like to add a final recommendation, this one from the Richmond Public Library Foundation: Palaces for the People by Eric Klinenberg. Klinenberg crafts a compelling and readable argument for social infrastructure (like libraries!) as essential to defending a civic society and supporting healthy, equal communities.