There is a nice variety of new fiction and nonfiction by Latinx authors that you can browse right now, from the comfort of your own home, on Hoopla. I’ve selected a few of my favorite new titles that I know you’ll love. The descriptions are from Hoopla, the editorial comments are mine. 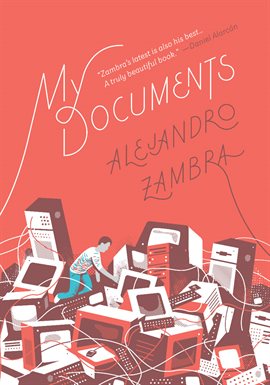 This isn’t “new new” but fairly recent and I have to include it because it’s a personal favorite of mine. I was delighted to see it available through Hoopla: My Documents by Alejandro Zambra

“My Documents is the latest work from Alejandro Zambra, the award-winning Chilean writer whose first novel was heralded as the dawn of a new era in Chilean literature, and described by Junot Díaz as ‘a total knockout.’ Now, in his first short story collection, Zambra gives us eleven stories of liars and ghosts, armed bandits and young lovers-brilliant portraits of life in Chile before and after Pinochet. The cumulative effect is that of a novel-or of eleven brief novels, intimate and uncanny, archived until now in a desktop folder innocuously called ‘My Documents.’ Zambra’s remarkable vision and erudition is on full display here; this book offers clear evidence of a sublimely talented writer working at the height of his powers.” 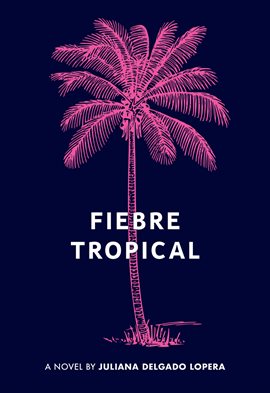 Check out his fantastic, LGBT coming of age story: Fiebre Tropical by Juliana Delgado Lopera
“Uprooted from Bogotá into an ant-infested Miami townhouse, fifteen-year-old Francisca is miserable in her strange new city. Her alienation grows when her mother is swept up in an evangelical church, replete with abstinent salsa dancers and baptisms for the dead. But there, Francisca meets the magnetic Carmen: head of the youth group and the pastor’s daughter. As her mother’s mental health deteriorates, Francisca falls for with Carmen and is saved to grow closer with her, even as their relationship hurtles toward a shattering conclusion.” 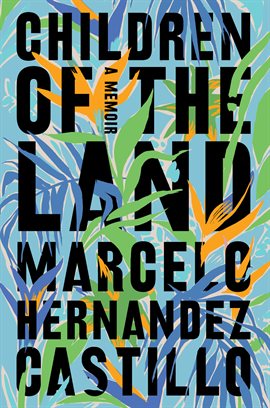 Check out why this memoir is getting rave reviews: Children Of The Landby Marcelo Hernandez Castillo
“This unforgettable memoir from a prize-winning poet about growing up undocumented in the United States recounts the sorrows and joys of a family torn apart by draconian policies and chronicles one young man’s attempt to build a future in a nation that denies his existence.’You were not a ghost even though an entire country was scared of you. No one in this story was a ghost. This was not a story.’
When Marcelo Hernandez Castillo was five years old and his family was preparing to cross the border between Mexico and the United States, he suffered temporary, stress-induced blindness. Castillo regained his vision, but quickly understood that he had to move into a threshold of invisibility before settling in California with his parents and siblings. Thus began a new life of hiding in plain sight and of paying extraordinarily careful attention at all times for fear of being truly seen. Before Castillo was one of the most celebrated poets of a generation, he was a boy who perfected his English in the hopes that he might never seem extraordinary.” 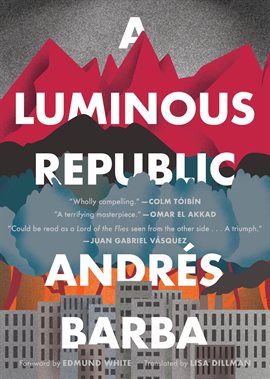 Everything by this author is good: A Luminous Republic by Andrés Barba

“A new novel from a Spanish literary star about the arrival of feral children to a tropical city in Argentina, and the quest to stop them from pulling the place into chaos. San Cristóbal was an unremarkable city-small, newly prosperous, contained by rain forest and river. But then the children arrived. No one knew where they came from: thirty-two kids, seemingly born of the jungle, speaking an unknown language. At first they scavenged, stealing food and money and absconding to the trees. But their transgressions escalated to violence, and then the city’s own children began defecting to join them. Facing complete collapse, municipal forces embark on a hunt to find the kids before the city falls into irreparable chaos.” 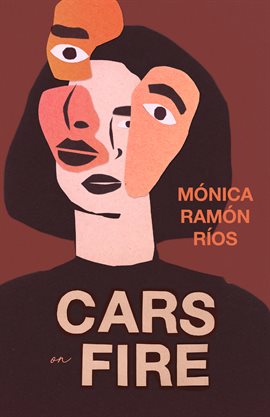 Enjoy something global, thought-provoking, and female-forward: Cars On Fire by Mónica Ramón Ríos

“Cars on Fire, Mónica Ramón Ríos’s electric, uncompromising English-language debut, unfolds through a series of female characters-the writer, the patient, the immigrant, the professor, the student-whose identities are messy and ever-shifting. A speechwriter is employed writing for would-be dictators, but plays in a rock band as a means of protest. A failed Marxist cuts off her own head as a final poetic act. With incredible formal range, from the linear to the more free-wheeling, the real to the fantastical to the dystopic, Rios offers striking, jarring glimpses into life as a woman and an immigrant. Set in New York City, New Jersey, and Chile’s La Zona Central, the stories in Cars on Fire offer powerful remembrances to those lost to violence, and ultimately make the case for the power of art, love, and feminine desire to subvert the oppressive forces-xenophobia, neoliberalism, social hierarchies within the academic world-that shape life in Chile and the United States.” 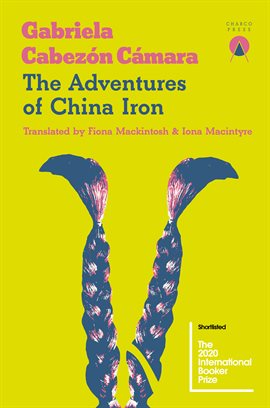 Looking for a short and wild ride? This one clocks in at 188 vibrant pages:
The Adventures Of China Iron by Gabriela Cabezón Cámara

“I took off my dress and the petticoats and I put on the Englishman’s breeches and shirt. I put on his neckerchief and asked Liz to take the scissors and cut my hair short. My plait fell to the ground and there I was, a young lad. Good boy she said to me, then pulled my face towards her and kissed me on the mouth. It surprised me, I didn’t understand, I didn’t know you could do that and it was revealed to me so naturally: why wouldn’t you be able to do that? Liz’s imperious tongue entered my mouth, her spicy, flowery saliva tasted like curry and tea and lavender water. 1872. The pampas of Argentina. China is a young woman eking out an existence in a remote gaucho encampment. After her no-good husband is conscripted into the army, China bolts for freedom, setting off on a wagon journey through the pampas in the company of her new-found friend Liz, a settler from Scotland. While Liz provides China with a sentimental education and schools her in the nefarious ways of the British Empire, their eyes are opened to the wonders of Argentina’s richly diverse flora and fauna, cultures and languages, as well as to the ruthless violence involved in nation-building.This subversive retelling of Argentina’s foundational gaucho epic Martín Fierro is a celebration of the colour and movement of the living world, the open road, love and sex, and the dream of lasting freedom. With humour and sophistication, Gabriela Cabezón Cámara has created a joyful, hallucinatory novel that is also an incisive critique of national myths.” 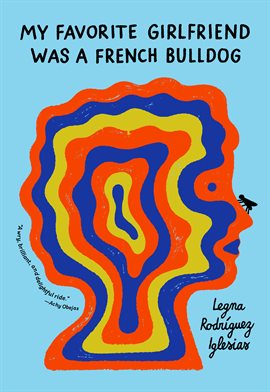 Looking for an eAudiobook? This title is available as both:

My Favorite Girlfriend Was A French Bulldog by Legna Rodriguez Iglesias

“My Favorite Girlfriend was a French Bulldog is a novel told in fifteen stories, linked by the same protagonist, our narrator, who-in her own voice and channeling the voices of others-creates an unsparing, multigenerational portrait of her native Cuba. Though she feels suffocated by the island and decides to leave, hers is not just a political novel-nor just a queer novel, an immigrant novel, a feminist novel-but a deeply existential one, in which mortality, corporeality, bureaucracy, emotional and physical violence, and the American Dream define the long journey of our narrator and her beloved pet dog, who gives the book both its title and its unforgettable ending. In its daring style and structure-both playful and profound, youthful and mature – and its frank discussion of political and sexual identity, My Favorite Girlfriend was a French Bulldog marks the emergence of an original and essential new voice.” 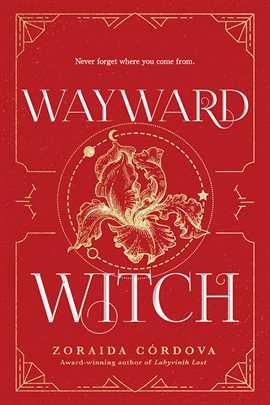 In the mood for a magical tale? Check out Wayward Witch by Zoraida Córdova
Part 3 of the Brooklyn Brujas series

“Infused with Latin American tradition-the Brooklyn Brujas series follows three sisters-and witches-as they develop their powers and battle magic in their hometown and worlds beyond. Rose Mortiz has always been a fixer, but lately she’s been feeling lost. She has brand new powers that she doesn’t understand, and her family is still trying to figure out how to function in the wake of her amnesiac father’s return home. Then, on the night of her Death Day party, Rose discovers her father’s memory loss has been a lie. As she rushes to his side, the two are ambushed and pulled through a portal to the land of Adas, a fairy realm hidden in the Caribbean Sea. There Rose is forced to work with a group of others to save Adas. Soon, she begins to discover the scope of her powers, the troubling truth about her father’s past, and the sacrifices he made to save her sisters. But if Rose wants to return home so that she can repair her broken family, she must figure out how to heal Adas first.” 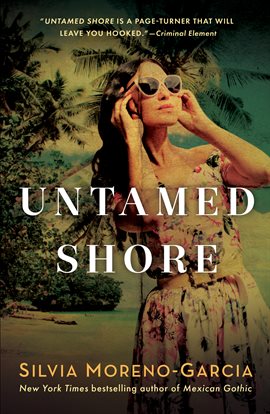 Did you totally love Mexican Gothic? Then check out Untamed Shore by Silvia Moreno-Garcia

“Renowned author Silvia Moreno-Garcia’s first thriller, Untamed Shore, is a coming-of-age story set in Mexico, which quickly turns dark when a young woman meets three enigmatic tourists. Baja California, 1979. Viridiana spends her days watching the dead sharks piled beside the seashore, as the fishermen pull their nets. There is nothing else to do, nothing else to watch, under the harsh sun. She’s bored. Terribly bored. Yet her head is filled with dreams of Hollywood films, of romance, of a future beyond the drab town where her only option is to marry and have children.Three wealthy American tourists arrive for the summer, and Viridiana is magnetized. She immediately becomes entwined in the glamorous foreigners’ lives. They offer excitement, and perhaps an escape from the promise of a humdrum future.When one of them dies, Viridiana lies to protect her friends. Soon enough, someone’s asking questions, and Viridiana has some of her own about the identity of her new acquaintances. Sharks may be dangerous, but there are worse predators nearby, ready to devour a naïve young woman who is quickly being tangled in a web of deceit.”