All Richmond Public Library locations are open beginning July 6, 2020. Visit our Reopening Page to learn more before your visit. 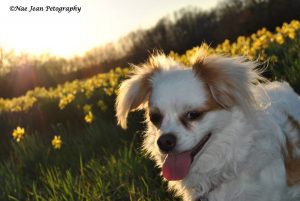 (Photo credit to Nae Jean Petography, also known as yours truly, “Paws and enjoy the moment!”)

Springtime is a time of renewal.  Some people do spring cleaning to start fresh, putting away a lot of the winter clothes and getting short sleeves back out. Some people start planting their gardens. Ostara, Easter’s origin story, is observed on the day of perfect equilibrium which is now the Vernal Equinox. We celebrate the rebirth of nature in Spring so in honor of the new season, here’s a handful of new books to delve into that were all published within the last six months. Three real life and three fiction.

Sarai Saves the Music is an adorable short story based on true events. This one caught my eye because of my love of music and it brought back memories of my own beginning band in school (flute and piccolo player here.) Sarai’s school has to cut their budgets and it seems that the music program is on the chopping block. This is a valid tragedy and she works hard to find a way to save it. Letters to officials, fundraising concert, and a short video production to tell everyone why music programs are important in schools are all on her to do list. The story ends with a couple sweet surprises for Sarai and funding for her music class. It’s definitely worth a read.

I chose Never Caught, the Story of Ona Judge for it’s historical point of view. It is excellent for upper elementary students. The author takes the time to put in definitions of possibly unknown words so that her readers unquestionably understand what she is talking about. She doesn’t sugarcoat the realities of slaves during this time either or attempt to portray our first President through rose-colored glasses. Ona Judge was brave and strong enough to fight for herself. It’s quite the empowering story.

14 Cows for America is a deeply touching short story about the Masaai people in Kenya. One of their people came to tell them the story of the twin towers, the tragedy of 9/11. They are a generous people and want to help. It is said that to the Masaai, the cow is life. Without their herd, the people of the village would surely perish. So, as the title suggests, they contact a local diplomat so that they can celebrate life and bless and donate 14 cows for America. It is summed up beautifully on the last page, “Because there is no nation so powerful it cannot be wounded, nor a people so small they cannot offer mighty comfort.” There is a stirring end-note from the man who told the story of 9/11 to his people, telling the conclusion of the donation, how those cows were sacred and have flourished in the years since. It’s beautiful to see the connection we can have as humans with one another when we are kind.

I chose Let Sleeping Dragons Lie solely for the author (Garth Nix is one of my favorites) and my love of dragons. As sometimes happens with high expectations, they fell short. It’s a story of Sir Odo, Sir Eleanor and their talking swords who travel with an old king and his bodyguard to help the Prince become the new king before a conniving grandmother can take over. There’s all sorts of intriguing monsters and characters but I was hoping for a bit more back story into the knight’s beginnings as it was constantly referenced and maybe how all the creatures came to be. I also wanted much more dragon involvement but alas. It was still a fun read and I will be on the lookout for a continuation in the series.

Eventown is an odd one, and yes I’m aware of the irony there. I chose it because in the book jacket I read that one of the main characters shared my name, Naomi. The story is of twin pre-teen girls starting off in a normal school setting. As it goes, we see that they’re getting ready for a move to a new town, Eventown, due to some big event that is alluded to but not yet discussed. The longer they’re in the new town, the more weird things they notice. There are no cars, TV’s or even books. There are only three ice cream flavors and one song and all the rose bushes are identical. This book did such a good job of putting the reader on edge and antsy that I had to put it down 60% through and scroll through fluffy dog photos for thirty minutes just to get my mojo back. It doesn’t reveal the cause of all the unease until the last 30 or so pages so be prepared! I would recommend this book for middle school students but not elementary. Ease of reading, it’s great, but the topics and intensity I believe require a bit more maturity.

Monstrous devices was not what I was expecting. It was a fast-flowing and at times confusing read, seemingly purposely so. The main character and his grandfather are fascinated with old toys, particularly robots and a unique one has sent them on a wild adventure. From Paris to Prague they are being followed and attacked by humans and robots alike while the grandfather answers his questions without really answering them. Even by the end, the reader is left with armfuls of unanswered inquires. Definitely a fun read though, I’ll give it that. It’s not a cliffhanger per se, but it does leave you wanting more. It’s the first ever book for this author so maybe there’s more in the future.

Naomi is a recent transplant to Richmond and a voracious eclectic reader. She can often be found with stacks of varied books, from romance and history to science fiction and children's stories. Always up for conversations about books, feel free to stop by to say hi or drop an email!