Posted about 2 years ago by Naomi D'Archangel
Posted in Book Reviews, Children's | Tagged with back to school, book recommendations
0
0
112
Share

I’m in the latter category as summer has been so long this year personally. The Summer Reading Program was wonderful and stamping all the passports was pretty exciting but it seemed like summer itself just kept going and going and going. My kids had a blast at numerous activities here at the library as well as extra time at local parks though so that was a plus. Then again, where I’m from, school started a solid month ago so maybe I was just used to a shorter summer break. Ah well, on to school activities!

Starting a new school year can be stressful for kiddos. Maybe they went from elementary to middle school. Maybe there’s a new teacher. Or maybe their best friend is no longer in class with them. Whatever the case, laughter and humor are always good medicine for some school-time blues. I’ve put together a collection of strange and silly schools for you to pique your interest or get you laughing. Please enjoy.

Teacher From the Black Lagoon is a childhood favorite of mine. I was so happy when it started to become a collection of books instead of just a one-off. In this story, a boy is starting his first day of school and is curious about his teacher. He’s heard rumors of one being a monster. He discovers that the scary Mrs. Green is his teacher. His imagination runs wild! Catastrophes happen to numerous classmates culminating in the climatic line, “Now it’s nap-time. Everyone who still has one, put your head on your desk.” When he wakes up, he discovers that everything isn’t as it first seemed.

Monster Academy is a cute little book showcasing monsters of all kinds. Its sing-song rhyming scheme has Seussical similarities. It teaches a simple lesson of manners and inclusion. Not all monsters are as they seem on the outside, but they’re still one of us.

The Day Jimmy’s Boa Ate the Wash is quite a classic. I can imagine my own children spinning such a tale now, or possibly being the one to bring a random pet on a field trip!  It starts off simple enough, Mom asking how a class trip to the farm went. Child saying it was pretty boring, “until the cow started crying” which led to a series of why?! questions that eventually reveal the consequences of a classmate bringing his pet boa constrictor on the excursion.

Sideways Stories from Wayside School is another old favorite. The story goes that the school was built up 30 stories instead of all on one floor. It is so much fun, imagining all the hi-jinks a sideways school could get into. From a dead rat in a raincoat and a non-existent floor to a teacher turning kids into apples, there’s something for everyone to giggle about. 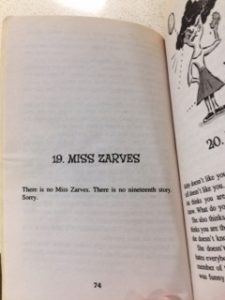 Miss Daisy Is Crazy is the first in the My Weird School series. Miss Daisy is a second grade teacher who claims not to know anything. The principal challenges them to read a million pages so that they can turn the school into an arcade for the night. Her students take it upon themselves to teach her reading and math.

Mrs. Smith’s Spy School For Girls was a lovely read. The main character Abigail gets a letter that she’s been accepted into a boarding school. She’s had a fairly eventful life, travelling around the world with her mom but normal otherwise. Strange things seem to happen around her at the boarding school. She accidentally overhears a conversation and learns that her mom is actually a spy, and not just any spy, the best one ever. The school she’s attending doubles as a spy school for kids! Her mother is missing though and her help is enlisted in an attempt to find her. I was intrigued from start to finish and am looking forward to reading a second in the series.

Harry Potter. Ah, this lovely series. I might be telling my age a bit but I was a part of the generation that grew up with the characters as the movies came out. Between that and my love of magic makes these books (and movies) near and dear to me. If you don’t already know, Harry is an orphaned boy who on his 11th birthday was informed that he was a wizard and that he could now attend a special wizard school. He also learns that his name (and story) are known to EVERYONE. His fame being due to a freak accident as a child where he “defeated” the most powerful dark wizard of that time. These stories follow him and his friends as they find themselves getting into more dangerous scrapes year after year.

Ender’s Game. Now, I admit that for once I watched the movie before reading the book. Please don’t hate! It’s only because the movie was available before the book in our system for me. This story is a version of what *could* happen in the future. Kids have the quickest reflexes (of course) and so they are used to pilot drones and such in wars. They practice on tablets as war games. The titular character is the best of the best according to a supervisor so he gets into more and more detailed simulations and eventually leading his own team. I won’t give away the twist but it did catch me by surprise.

Marked is the first in the House of Night series. Zoey Redbird is a normal teen in Oklahoma, or so she begins. As the title suggests, Zoey is soon marked which in this reality means that she is magically given a crescent moon tattoo on her forehead that shows her to be a vampire in training (fledgling) although hers is more complete thanks to gifts and instructions from the Goddess Nyx. Fledglings go to a school just for them while they’re learning how to deal with what they’re becoming. Some people have an affinity for an element (air, earth, fire, water, or spirit) which they put to use during rituals, which is very reminiscent of pagan ones, calling each element to the circle before praying to the Goddess. Zoey has the rare affinity for all 5. Things aren’t always what they seem though as the headmistress is a bit shady, maybe hold a bit. All in all, it’s very down to earth and easily relatable for high school students (and adults too!)

Naomi is a recent transplant to Richmond and a voracious eclectic reader. They can often be found with stacks of varied books, from romance and history to science fiction and children's stories. They are one of several Bookologists as well! Always up for conversations about books, feel free to stop by to say hi or drop an email!