By Teens, For Teens – Zoe Rosenthal is Not Lawful Good & Good Will Hunting

This week we have another “double feature” for you. VolunTEEN Catherine F., age 14 brings you a book review about a teen who tries to lead her life in the most planned, organized fashion. Can she do it? Then, enjoy a movie review of a classic friendship story, written by Isabelle R., age 16.

Zoe Rosenthal is Not Lawful Good by Nancy Werlin

Zoe Rosenthal is Not Lawful Good is a book that despite having a couple criticisms I overall enjoyed. Something I really like about this book is the pacing. This is because the story revolves around the main character attending different fan conventions and the story is structured so that each section of the book relates to attending a different con. Another aspect of this book that I like is that it also has a fair amount of LGBTQ+ representation, featuring a gay character, a nonbinary character, and an asexual character. Additionally representation-wise, one of the major characters is autistic and Zoe, the main character is Jewish. A criticism of the book that I have comes from the fact that Zoe is a fan of a fictional television series called Bleeders, and because this fictional series is an integral part of the plot as she attends multiple conventions and helps work to save the show, exposition explaining this show is necessary but sometimes can feel like too much explanation. Despite this criticism, overall Zoe Rosenthal is Not Lawful Good is an enjoyable book and I would recommend it to anyone that enjoys contemporary coming-of-age books or enjoys fandom and cosplay. 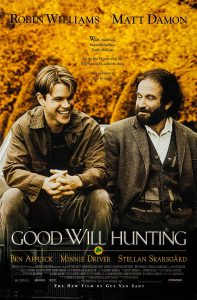 This movie is about a young man from “Southie,” a lower class suburb of Boston, who is working part-time as a janitor at MIT. He is upbeat with his friends, but the viewer can immediately see he is becoming more and more bitter as his obvious potential wastes away. He is stubborn but lovable, rough on the outside but secretly very thoughtful. He is accidentally recognized by the physics department as a prodigy, but his unhinged nature leads him to need an anger management psychologist. The formed rapport between “doctor” and “patient” is the greatest part of this movie. They lead each other to a greater level of happiness through a series of arguments and insults, both men ending up better off than before they met.

I recommend this movie to anyone looking for an entertaining bit of inspiration. It is a classic underdog movie and will captivate audiences of all ages. The story itself is incredibly moving and tends to motivate its viewers in a very positive way. The casting is perfect; including stars like Matt Damon, Ben Affleck, and Robin Williams in their prime. Also, for all the Yellowstone fans, Cole Hauser appears in this movie as a young actor.