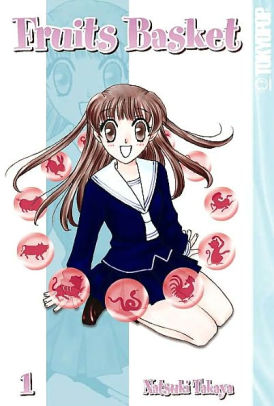 Ok, try not to be too appalled by what you are about to read…this is my first time reading manga.  I know, I know.  How could I have waited so long to try these out?!  I enjoy graphic novels but not as much comic books.  I guess I grouped manga in with comics and wrote them off.  My mistake!

Before committing to a certain manga for this prompt, I did a little research on which series were the best for beginners.  Fruits Basket by Natsukicame Takaya came up on several of the lists.  It’s also a series that circulates really well at our library so I thought I’d give it a shot.  It was ADORABLE!

Fruits Basket is the story of Tohru Honda, a young high school girl who is orphaned and living in a tent.  Fortunately for Tohru, she pitches her tent on the property of the Sohma clan, three young men who have a secret –they turn into one of the Chinese zodiac animals when touched by the opposite sex.  The Sohma’s end up taking Tohru in and all sorts of craziness ensues.

It took me a minute to get used to reading “manga-style” in the Japanese right-to-left format, but once I got used to it I had tons of fun with this one!

If you are a beginning manga reader like me, here are some more suggestions for prompt #11:

Also, here are Book Riot’s suggestions for this prompt. 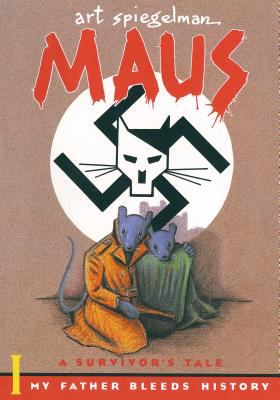 Prompt #12: A book in which an animal or inanimate object is a point-of-view character

It took me a long time to figure out what to read for this prompt.  Surprising, there aren’t that many YA books written from the POV of an animal or inanimate object.

Maus: A Survivor’s Tale by Art Spiegelman is actually a re-read for me.  I read it during library school for a graphic novels class…yes, those do exist!  Maus is a Pulitzer Prize winning graphic novel and rightfully so.  Set during the Holocaust, the story recounts the experiences of the author’s father as a Jew in Nazi Germany.  The Jews in the story are depicted as mice and the Nazis as cats.

You might initially think that the brutal, horrific events of the Holocaust would be somewhat softened by the use of animals as POV characters.  In truth, just the opposite occurs.  Readers are forced to look at the Holocaust in a different way, experiencing the tragedy anew.  Spiegelman does not hold back in the telling of this tale.

Here are some other books to fulfill prompt #12:

Watership Down by Richard Adams

The Art of Racing in the Rain by Garth Stein

Memoirs of a Polar Bear by Yko Tawada