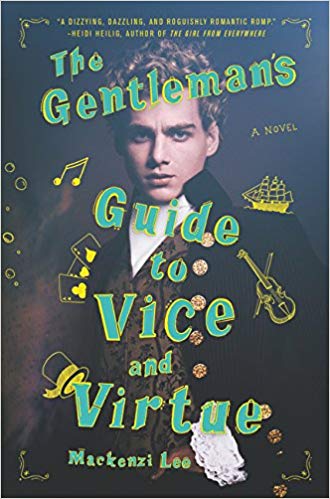 I feel like I should start out this review by saying that humor is not typically my genre of choice.  But, like most people, I enjoy a good laugh so I was really looking forward to completing this prompt.  I had originally planned to read another book for this prompt.  However, I decided to go with a book on my home bookshelf that I haven’t read yet because let’s be honest, I do way to much of this…

The Gentleman’s Guide to Vice and Virtue by Mackenzi Lee, has been on my shelf  for about a year.  I bought it on a whim at a local bookstore because I had been hearing a lot of buzz about it.  I had also recently listened to and enjoyed My Lady Jane by Cynthia Hand.  The covers and descriptions of both books looked similar so I thought I’d give it a try.  The Gentleman’s Guide is the story of the Montague siblings, Monty and Felicity, and friend Percy.  The trio is sent off on a “Grand Tour” of Europe in order to become cultured (aka sow their wild oats) before returning home to life as adults with real responsibilities.  (On a side note, these “Grand Tours” were really a thing back in the day.)  Along the way, they encounter dangerous highwaymen, pseudo pirates, dastardly nobles, a sinking island, and a puzzle box that may hold the cure to all human ailments.  There is also quite a bit of party crashing, steamy romance, and other scandalous affairs.  This book was adorable, the characters lovable, and the plot engaging.  My only qualm was that the central mission of the story didn’t quite make sense to me.  It was a little too fantastical without enough fleshing out or explanation.  Otherwise, this was a fun read!

Want some more recommendations for Prompt #4: A humor book?  Check these out:

Why Not Me? by Mindy Kaling

I Can’t Make This Up: Life Lessons by Kevin Hart

The Field Guide to the North American Teenager by Ben Philipe

Born a Crime: Stories from a South African Childhood by Trevor Noah

Hyperbole and a Half : Unfortunate Situations, Flawed Coping Mechanisms, Mayhem, and Other Things That Happened by Allie Brosh 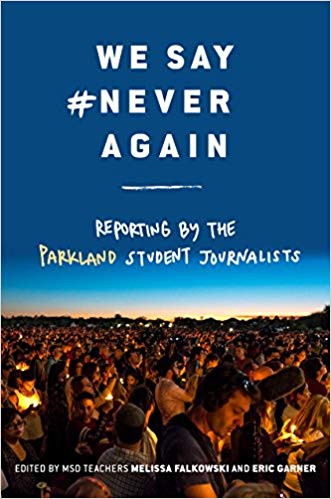 Prompt #5: A book by a journalist or about journalism

It’s a bit ironic (and not in a good way) that I am writing about this next book in the same blog post as the first.  However, I committed to completing the challenge prompts in order and that’s what I intend to do.

Following the Parkland High School massacre, students banded together in what I would argue is the largest student-led social and political movement of our generation.  Since then, The #NeverAgain movement has grown exponentially and impacted the lives of so many students, their families, and the public at large.  Because of this, I knew I needed to read We Say #NeverAgain: Reporting by the Parkland Student Journalists as soon as I got word of it’s publication.

This book is a collection of reports from the Parkland High School newspaper and TV station staff.  The majority of the articles are written by teens who were there at the time of the shootings.  The writing gives an inside perspective of the tragic event and the days following.  In it are details of how the movement began as well as the students’ response to becoming overnight activists.  The book hit shelves less than nine months after the shootings.  That is an impressive feat in and of itself.  Consequently, it is not perfect; however, it is extremely important.  I think it is a must read for teens and their parents, especially those who consider themselves activists or who maybe are just beginning to feel the itch of unrest.

Want some more recommendations for Prompt #5: A book by a journalist or about journalism?  Try one of these:

Five Days at Memorial: Life and Death in a Storm-Ravaged Hospital by Sheri Fink

The Smear : How Shady Political Operatives and Fake News Control What You See, What You Think, and How You Vote by Sharyl Attkisson

Bad News : Last Journalists in a Dictatorship by Anjan Sundaram

Settle for More by Megyn Kelly

Something Must be Done about Prince Edward County : A Family, a Virginia Town, a Civil Rights Battle by Kristen Green

The Rivalry : Mystery at the Army-Navy Game by John Feinstein

Mary McGrory : The First Queen of Journalism by John Norris

To Tell the Truth Freely : The Life of Ida B. Wells by Mia Bay

Slouching Towards Bethlehem by Joan Didion

Truth in Our Times : Inside the Fight for Press Freedom in the Age of Alternative Facts by David Edward McCraw