We’re in the home stretch for summer reading now. There’s still a few events left to attend, not to mention our closing bashes on August 10th. You’ve still got time to be entered into the prizes at each branch with your completed passports! Drawing will be done on Monday August 12 and winners will be notified as well as posted on our website.

Instead of book reviews this round, I’m going to be offering some simple and kid-friendly recipes for you from around the world. 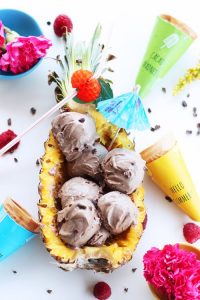 For this one, I chose a dessert that was based in the country in which someone in my family was born. Morocco. The dessert is called Caakiri and there’s numerous ways to make it. Here’s the recipe that I settled on. One box of plain couscous from grocery, 1 can condensed milk, 1 cup vanilla yogurt, 1/2 cup sour cream, dash of vanilla, some crushed pineapple on top and sprinkles of nutmeg. Make couscous according to directions. After fluffed and cooled, add the condensed milk, yogurt, sour cream, and vanilla. Once served in bowls, add your pineapple and nutmeg on top.

Mango sorbet is a simple Thai recipe that doesn’t require an ice cream machine. Slice and scoop out two fresh mangoes into a blender and add 1 cup of sugar. Blitz until the sugar is dissolved, should take about a minute. Add 3 tablespoons of coconut milk and 1 teaspoon of lemon juice and mix for a few seconds. Pour the mixture into a bowl temporarily. Next, put one small container of whipping cream (about a cup) into the blender. Mix until you get still peaks. Add the mango puree back into the blender and blitz for 5 to 10 seconds. Pour into a container for freezing, at least 8 hours. Now it’s ready to serve.

This continent has very few “native” recipes since very little can grow here and there is a plethora of protected species. Sledging biscuits and pemmican are the two main foods that sustain travelers to this region. As neither are simple, I’ll be sharing my own recipe for a snowy trail mix instead. 1 cup m&m’s, 1 cup yogurt raisins, 1 cup mini marshmallows, 1 cup cashews, 1 1/2 cups of pretzels. Mix all together in a big bowl and enjoy the “snowy” snack.

Pavlova is a traditional dessert here, named after Anna Pavlova the Russian ballet dancer and inspired by her fluffy tutu. I’ve found a super simple version of it for us. Ingredients needed are a pre-made meringue base, 1 cup heavy cream, 1 cup fruit (strawberries, kiwi, and bananas suggested), and 3 passion fruit. Place the meringue on a serving dish, whip the cream until you get stiff peaks and slather generously on top, followed by sliced fruit then the passion fruit is mixed to a pulp and drizzled on top. Tada! Ready to enjoy. Another simple traditional Australian dish is fairy bread. You start with a slice of bread on which you spread butter or margarine then drench in sprinkles and there you go.

I have it on good authority that the hazelnut spread Nutella is all the rage in Europe. (Thank you Gigi!) There’s so many fun ways it can be eaten. It can be spread on waffles and pancakes as well as on bananas and toast. Let your munchkins help you think of new things to put it on. The plethora of possibilities are wonderful!

Jell-O as we know it was invented in 1881. It was hugely popular in the 30’s and 50’s. I grew up with it at every holiday (Grandma’s Jell-o salad), every church meal gathering (without fail), and quite often in between. The most fun I’ve had making Jell-o with my own kids is Jell-o dirt cup so that will be today’s recipe. Start with a box of chocolate Jell-o pudding and make according to directions on package. Next grab a handful of Oreos and separate the cookies from the cream. Place the cookies in a plastic bag and crush them into crumbs. Now it’s time it put it together. First, put the pudding in the bowl or cup. Follow it with the cookie crumbles until you can no longer see the pudding. The finishing touch is a few gummy worms to help with the illusion of dirt. Dig in!

Last but certainly not least, a treat from Brazil. This one needs the most adult supervision but little hands can still help! Brigadeiro is described as being tootsie rolls in ball shape. In a medium saucepan over medium heat, combine 3 tablespoons of unsweetened cocoa, 1 tablespoon of butter, and one 14oz can of sweetened condensed milk. Stir constantly until thickened so that you can see the bottom of the pan when stirring. Remove from heat and rest until cool enough to handle. (putting in freezer helps!) Here’s where the kiddos can come in. It’s time to roll the mixture into small balls. Spraying hands with PAM will keep it from sticking to you. After rolling, they can then be rolled in sprinkles or coconut shavings or anything you desire to customize them. Yummy!

I hope you all get some enjoyment from these recipes. I would be interested to hear how they worked for you!

Naomi is a recent transplant to Richmond and a voracious eclectic reader. They can often be found with stacks of varied books, from romance and history to science fiction and children's stories. They are one of several Bookologists as well! Always up for conversations about books, feel free to stop by to say hi or drop an email!