Interning at the RPL: 1970’s Film and Historical Trends in the Archives

When given the choice between finishing my Bachelor’s degree in history at VCU with either a CAPStone research paper or an internship, I jumped at the opportunity to do field work. Not only are internships invaluable experiences and a crucial component of resumes, but in the light of the Covid-19 pandemic and virtual learning, I much preferred hands-on experience to the thought of spending my last semester learning remotely and writing a research paper from the confines of my one bedroom apartment. While this has not been the senior year I anticipated by any means, so far I have had a very rewarding experience that has enabled me to work with a variety of primary sources with which I have already learned a lot.

Since the beginning of August 2020 I have made a significant amount of progress processing and digitizing part of the RPL Archival History Collection, and have enjoyed the chance to do hands-on archival work and see the development of an institution and its records. At the same time, to finish my degree requirements I have been taking a class on the History of 1970s Film, which has provided me with the unique opportunity to observe these same historical trends in the materials of the RPL’s archives. The focus of this course, taught by Professor Emilie Raymond, is how 1970s films reflected the cultural shifts of the late 1960s and early 1970s that resulted in what is referred to as “New Hollywood,” which gained traction after the 1968 repealing of the 1930s Production Code and its subsequent replacement with the Motion Picture Association of America’s (MPAA) ratings system that enabled audiences to self-censor. Destabilizing events such as the drawn out Vietnam War and increasingly violent anti-war protests, the Watergate scandal, the initiation of the Black Power movement, numerous political assassinations, and the economic disaster of stagflation deeply troubled the nation as a general sense of alienation and cynicism towards the government emerged. The failure of the surge of postwar political activism signaled to many Americans that they were unable to affect real political change. Anxieties about increased crime rates were heightened by Nixon’s campaign, which played on these fears in order to gain political support by drawing in the “Silent Majority”, white Southern middle class Americans that had traditionally voted democratic, but were also reflective of the reality of the times as violence became a part of everyday news; however, these fears were not altogether unfounded. 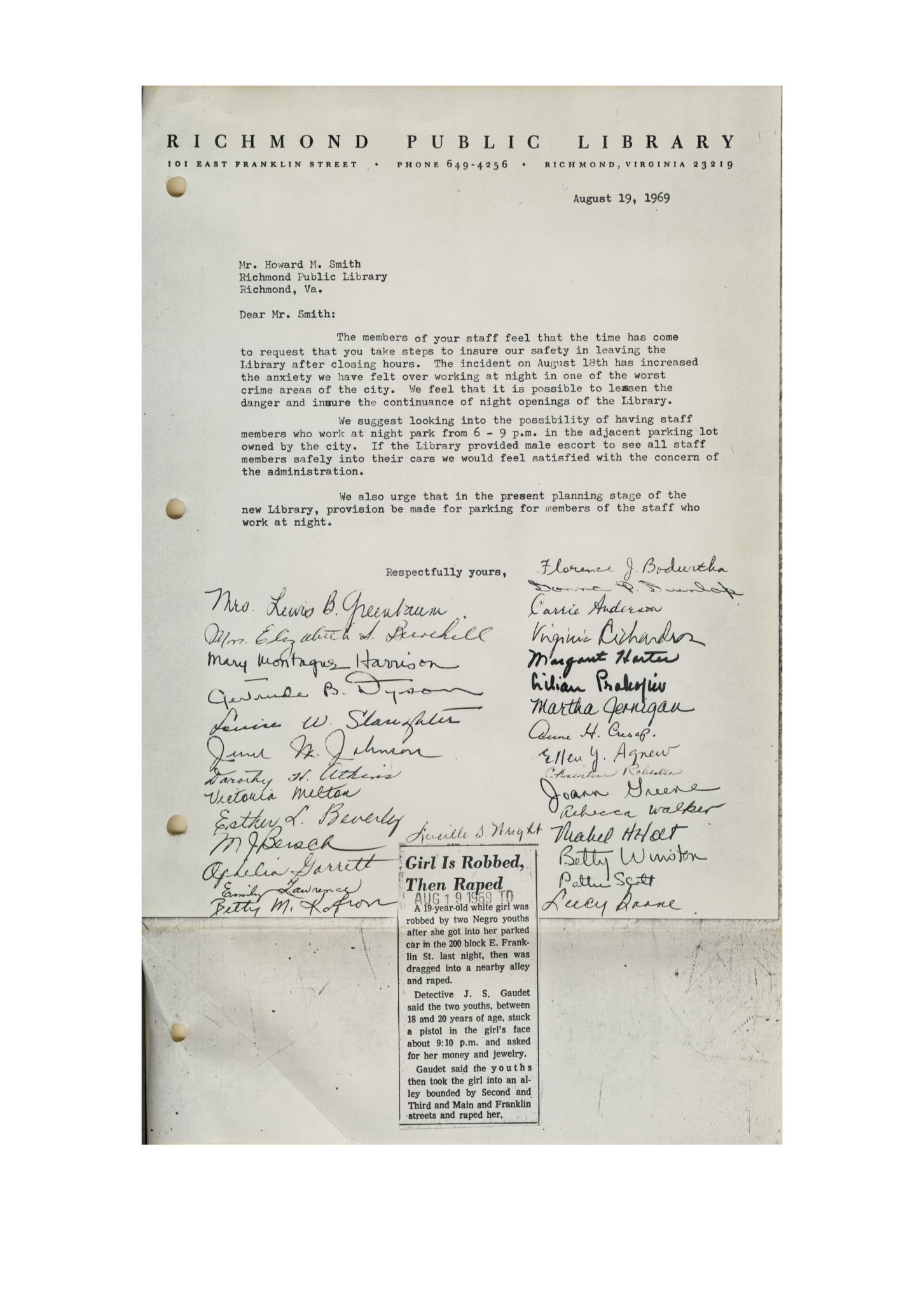 On August 18th, 1968, a 19 year old girl was brutally attacked by two men while getting into her car on the 200 block of E. Franklin Street, where she was robbed at gunpoint then taken into a nearby alley and sexually assaulted. This prompted the thirty female members of the Library staff to write a letter to Howard M. Smith, the Library Director, asking for increased security measures as they were working “in one of the worst crime areas of the city.” Their requests included a male escort to walk them to their cars in the evening and the planning of a designated employee parking lot at the new library. As a result of this petition, Mr. Smith hired two security guards for the evening hours, “to insure that a man will be in the evening each evening”. Reflecting the continuity of these anxieties, in 1976 a meeting on Self Defense was held for all interested female staff. Burglary systems were also later installed, and policies such as leaving on the exterior building lights were established. 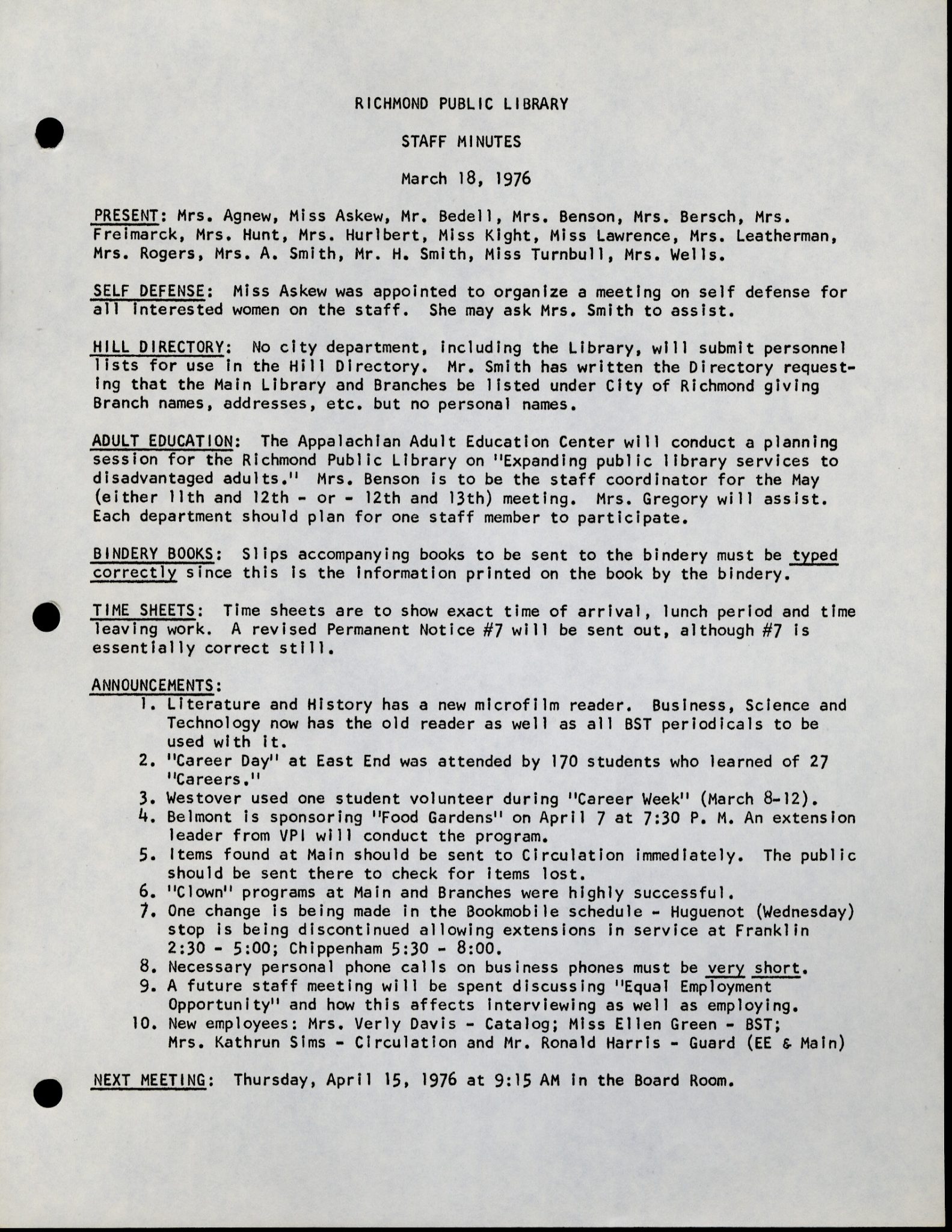 Another controversial topic of the decade was censorship, for the removal of the restrictive 1930s Production Code in 1968 enabled the Hollywood Renaissance to flourish as audiences instead began using MPAA’s self-censorship ratings system, and films took a drastic departure from Classical Hollywood. Combined with the rising audience crisis facing the studios, sex, violence, and drugs stole the spotlight as Hollywood attempted to target the growing influence American youths exhibited. This culminated in the August 13th, 1968 release of the breakout film Bonnie and Clyde, directed by Arthur Penn and starring the 1970s film icons Faye Dunaway and Warren Beatty, which immediately prompted intense criticism for its alleged glorification of gangsters, violence, and the imminent moral decay of the American society. Interestingly enough, exactly one month after its release date, in a Library Board Meeting it was stated that, “Mr. Smith reported an outbreak of discipline problems at the East End Branch, following the opening of school. Mr. Smith said that he was striving to fill several vacancies at the Branch and hoped to provide some mature, male assistance.” Is it possible that the callous attitude the gang displays in the movie actually did influence American teens, as claimed by the substantial numbers of critics of the movie? While this is likely a coincidence, there actually was one reported instance of a group of Connecticut teenagers dressed in 1930s style clothing who watched the movie and went out on a “lark” of their own, flashing a toy pistol at a bank before being arrested by the police. Thus, incidents like these only added to the legitimacy of the claims of those critics, and therefore even as censorship began to be relaxed, it remained a point of contention.

This contention was evidenced by the number of letters concerning censorship that were received by the RPL in the 60s and 70s, more than recorded in any of the other Board Minutes from different decades, which of course were always met with the same firm stance against censorship on the part of the Library. In response to two editorials in the Richmond News Leader which criticized the book selection of the RPL for favoring a “liberal” point of view even though the Library did in fact own 20 of 27 “conservative” books listed in the article, Mr. Smith stated, 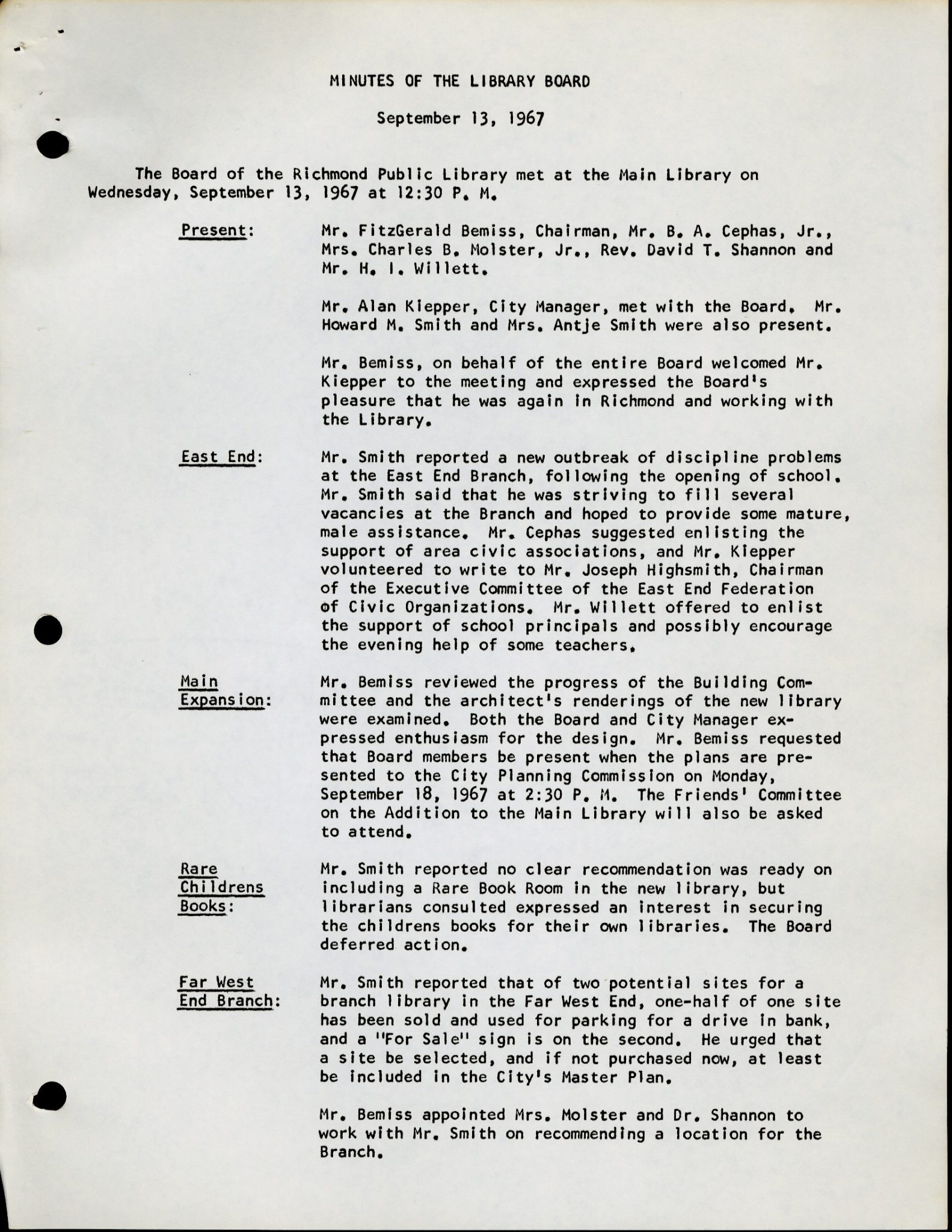 “As you are aware, I am unequivocally opposed to such censorship in a public library. The Richmond Library is maintained for the benefit of the entire public, and it should not be controlled by any particular class, creed, or set of opinions. No person in this city is under the slightest obligation to borrow a book of which he disapproves, but he should not be given an opportunity to inflict his prejudices upon other readers. This, of course, does not apply to the children’s branch, where supervision in the interest of ethics and education is, no doubt, beneficial.”

Although the Library system received a number of complaints, they were continually met with this same stance of the freedom of the reader to decide for themselves that dated back to the opening discussions of the purpose of the library, and reflected the same stance that was taken up in film, in that the viewer should be able to decide what to watch for themself while not imposing their decision upon others. 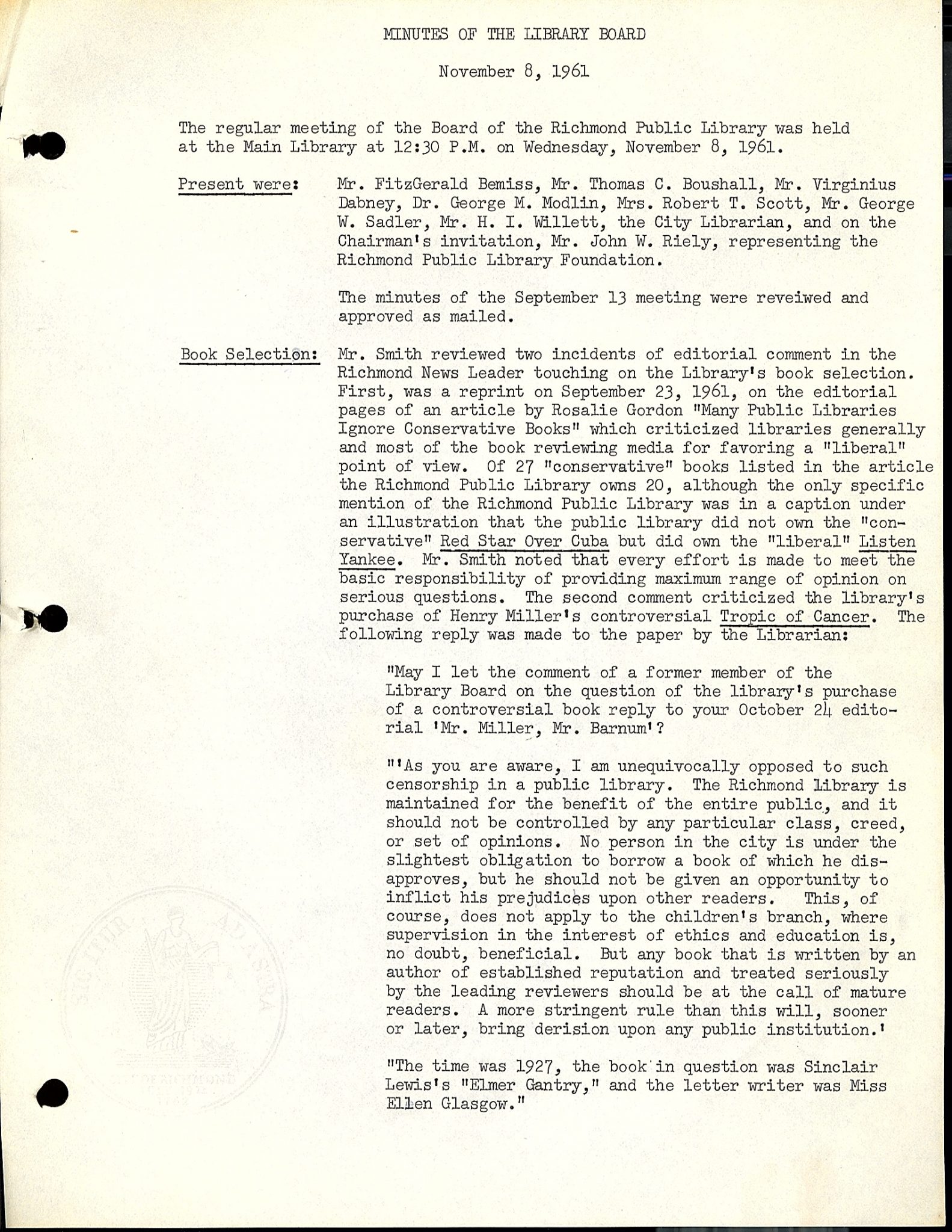 Finally, another major theme of the 1970s was the “plugging in” of different groups, be it gender, ethnic, or religious, as the postwar spirit of intervention faded, Americans increasingly turned inward, rejecting political participation in what was viewed as a broken system. This trend caused the 1970s to be labeled the “Me Decade” as disillusioned American’s set out on religious and spiritual quests to find or redefine themselves. For example, in addition to the religious revivals of traditional religions, the Third Great Awakening, as it came to be called, saw the embrace of Eastern religious thought and alternative spirituality such as holistic medicines, yoga, crystals, herbalism, and even experimentation with Wicca culture. There was considerable and sustained debate between a group called the International Meditation Society and the Library Board as the group sought the right to hold meetings in the Library even though they violated the rule that Library meeting rooms may not be used by groups that were selling goods or services as a result of the meeting– though there was no fee charged for the Introductory meeting by the society, their intent was to sign people up for a course on Transcendental Meditation. This prompted the International Meditation Society to write an impassioned five page letter pleading the case for the group to meet in the library, and eventually did lead to a revision of regulations to permit the group’s meeting.

It is primarily these sorts of daily occurrences and anecdotes which make working in the archives so enjoyable to me, as primary sources provide you with a more intimate side of history than is portrayed in the neutral stoicism and detachment of textbooks and secondary sources, and I have been lucky enough to get to read the frustrations, successes, hardships, annoyances, rewards, and all the other antics and individual efforts that accompanied the development of the Richmond Public Library into the successful, city-wide system that it is today as it approaches its centennial anniversary. 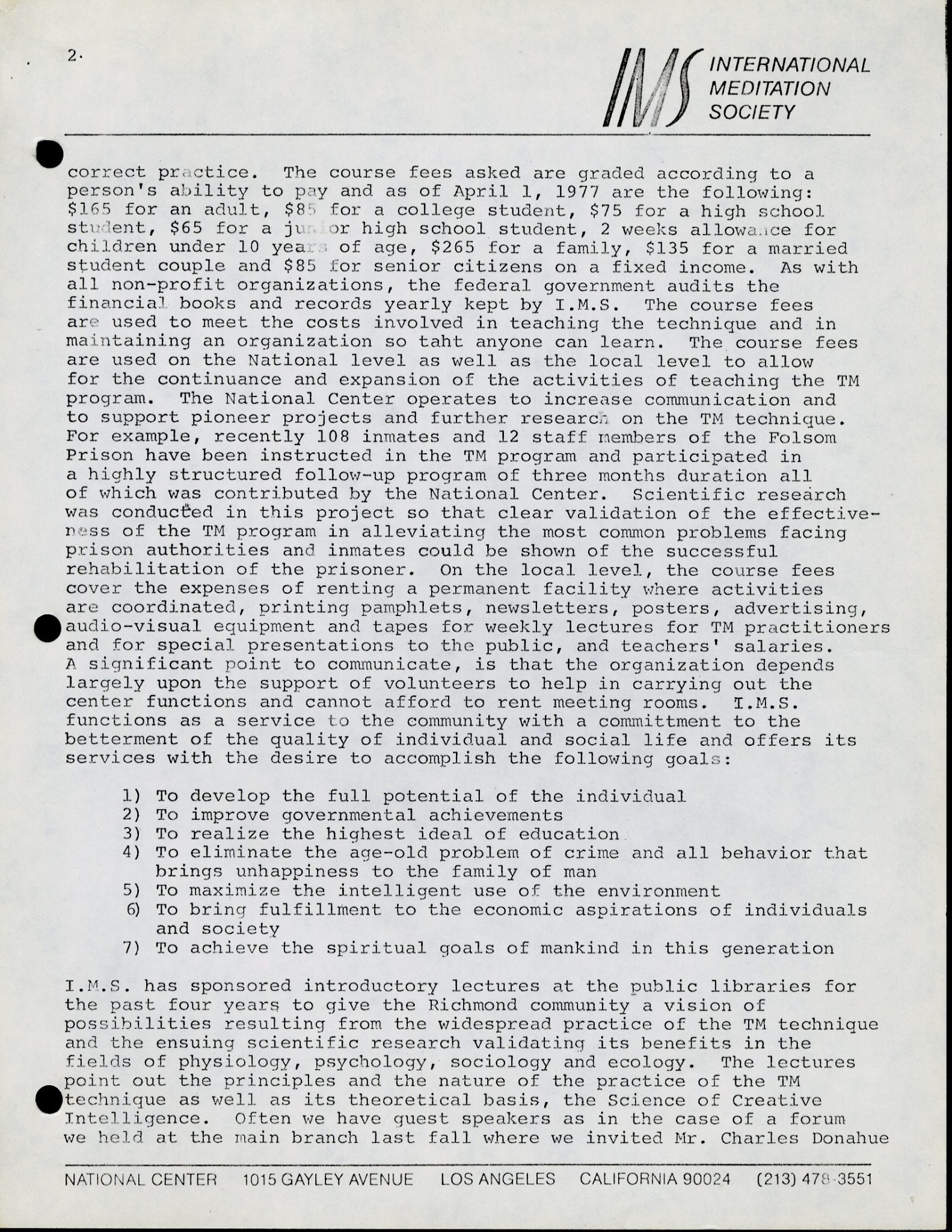