By Teens, For Teens – Love Medicine & The Shining

Welcome back for this week’s installment of By Teens, For Teens! This week we have two reviews for your reading pleasure, one on a book featuring Indigenous characters and one on a classic horror movie. Both of these reviews were written by VolunTEEN Isabelle R., age 17. 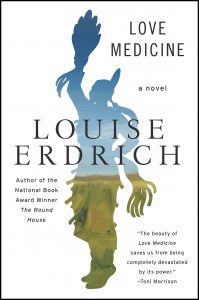 Love Medicine by Louise Erdrich is a novel set in North Dakota, on an Ojibwa Indian reservation. The story follows two main families living on the reservation, detailing themes of physical and substance abuse, family/tribal connections, racial and cultural assimilation, and religion. Through very convoluted means, Erdrich attempts to put the reader in the shoes of a modern day family living on a Native American reservation, helping them to see the disadvantages and problems of the current reservation system. Personally, I found the writing style to be unsatisfying and very few of the characters were able to be studied outside of a racial, tribal, or substance abuse context. But, the book did a wonderful job of describing life on the reservation, and includes many interesting details along with the many extraneous metaphors and characters.

I rate this book so lowly because I feel as though the style and high number of storylines negates the impact of the message. I do admire the talent of Erdrich in her making each character have a specific voice and part in the story. Erdrich does a nice job of helping the reader to understand her small points, but leaves relevant identification of themes to be desired. 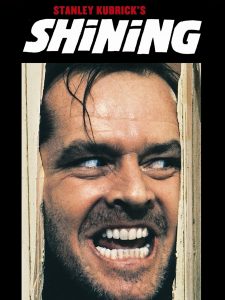 The Shining (1980) directed by Stanley Kubrick

The Shining takes place mainly in a remote hotel in the Rockies, in the 1970s. It is centered on the Torrance family; John, a struggling writer and father, has been hired as the caretaker for this hotel during the harsh Colorado winter. His wife, Wendy, and his young son, Danny have come along with him to live alone in this grand hotel for the 5-month winter, unable to leave due to the snow-covered roads. Danny, elementary school age, is a psychic, seeing visions and having frequent premonitions. The viewer won’t fear Danny, but certainly will fear the things he knows.

The hotel begins to reveal some malicious and downright terrifying things as the snow falls- realistic, possessing ghosts being the most haunting. Johnny starts to fall prey to the cabin fever effect that the hotel creates, and he starts to have nightmares and strange impulses. Danny can see these thoughts and see his father committing terrible crimes in the future through his visions. Danny has “the shine,” or the ability to see the future, past, and present in glimpses, forming the main plot of the movie. He can see things and act as a medium, but is unable to control his episodes due to his young age. As he gains bits and pieces of the hotel’s past, he realizes that the hotel has a shine of its own. Without spoiling the climax, the ghosts and eerie nature of the hotel catch up to John, and he becomes totally and completely deranged.

The Shining is the perfect horror movie; containing all the elements of a thriller without all the gore of the modern horror film. Jack Nicholson is truly frightening, even in some of his rom-com roles, making him the most perfect choice for the role. In the true nature of 70s film, the cinematography is jumpy and odd at times, but creates a wonderfully stirring horror fit for any movie-night.

If you would like to contribute to our blog or learn more about becoming a VolunTEEN visit https://rvalibrary.org/teens/volunteen/ for all the info and to apply!