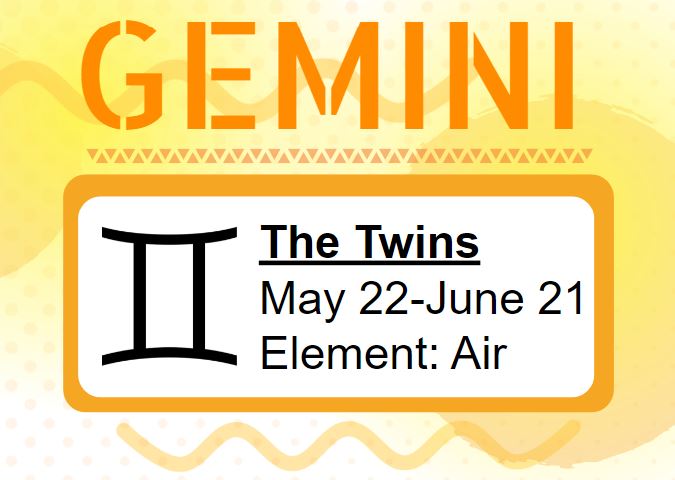 Every month of 2021, we will be sharing a tailored horoscope blog post for the current sun sign plus something a little extra so the rest of us aren’t completely left out!

For the record, today we’re going to lean hard into Gemini’s representation as The Twins. (And, if you would like to get on the same wavelength as me, feel free to listen to some Cocteau Twins while you read. The bandmates aren’t actually twins, but they produce some great morphing, moving, dreamy pop sounds.)

Geminis are sometimes considered two-faced, which at their worst can mean gossipy, but it can also just mean that they can quickly move from playful to serious, energetic to subdued, switching sides mid-argument or mid-discussion. Because they’re multi-bodied, Geminis are shapeshifters and always desire variety. They contain contradictions that are confusing and frustrating to some, but this is because Geminis are able to contain multitudes all at once.

The Twins are a perfect illustration of this. And when looking for fiction that shares traits with Gemini, look no further than these books involving twins (duh), clones, and alternate realities. 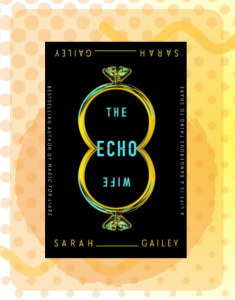 The Echo Wife by Sarah Gailey is a science fiction thriller that gives enough surprising twists and turns to satisfy any Gemini. When Evelyn Caldwell, a brilliant scientist who is focused more on her work than anything else, finds out that her husband, Nathan, is cheating on her, things go from bad to worse to absurd. Not only was cheating his response to feelings of neglect, but he is cheating on her with Evelyn’s cloned replica, Martine, who is everything Evelyn isn’t – patient, gentle, obedient, and pregnant. Then Martine, in a panic, calls Evelyn for help when Nathan dies. Not one to take the easy path, Evelyn helps Martine clean up the mess, but of course, things get even more complicated. (You can also check out Sarah Gailey’s mystery novel, Magic For Liars that features two very different, estranged twins and the murder that brings them back together.) 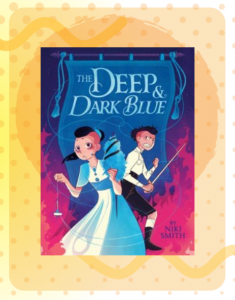 Always ready to learn and change, The Deep and Dark Blue by Niki Smith is another great read for Gemini. After a horrible coup usurps their noble house, the twins, Hawke and Grayson, go into hiding with the Communion of Blue, an order of magical women. Here they assume new identities as Hanna and Grayce. As they learn more about the Communion, they start forming a plan to avenge their family, but, although Hawke desperately wants to return to his old life and how things were before, Grayce finds that she is exactly where she wants to be, where she can finally live as a girl. The Deep Dark Blue is a beautiful and exciting juvenile graphic novel that shows siblings changing and becoming more assured in their own identities, while still being able to support each other and offer each other understanding.

Gemini is ruled by the planet Mercury, which in Roman mythology is the name for Hermes. Because of this, they are often drawn to learning languages, writing, or working in positions that require public speaking. Gemini can effortlessly communicate information and ideas…that is unless we’re in Mercury Retrograde, when things get turned upside down in this department. 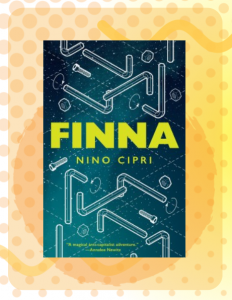 Finna by Nino Capri, not only is fitting because of alternate worlds and versions of self, but because the majority of the book is about two people, Ava and Jules, who recently broke up and have never seemed to be able to communicate with each other in the right way. When an elderly customer goes missing, stumbling through a portal in the IKEA-like store where they both work, Ava and Jules get roped into going on a mission to recover the customer. Just armed with the finna machine and its directions (which are not in English but do have handy diagrams), they will have to learn not only to work together, but to work through their complicated feelings about each other and the retail job that they both hate. 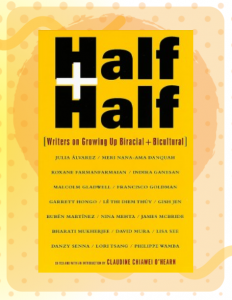 Gemini, who is always ready to learn and see something from many different angles, will appreciate Half and Half. Edited by Claudine Chiawei O’Hearn, this collection of personal essays has a common thread: the experience of growing up biracial and bicultural. Some writers talk about shifting between identities, while others talk about being “neither,” and still others about being “both/and.” As the book blurb states, “These eighteen essays, joined by a shared sense of duality, address the difficulties of not fitting into and the benefits of being part of two worlds.  Through the lens of personal experience, they offer a broader spectrum of meaning for race and culture.  And in the process, they map a new ethnic terrain that transcends racial and cultural division.”

“She hadn’t realized how long it takes to become somebody else, or how lonely it can be living in a world not meant for you.”

― Brit Bennett, The Vanishing Half 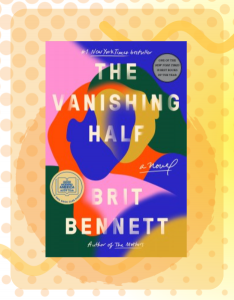 When talking about race, a concept that comes up often is the charged word “passing,” which is a huge part of the novel The Vanishing Half, by Brit Bennett. Desiree and Stella Vignes are identical twins who grew up in a small Southern community for “light-skinned” Black families. When they run away at 16, these two sisters’ lives go in very different directions – while Desiree a few years later returns to the small town with a son in tow, Stella disappears to live a life passing as a white woman. This is a beautiful, sometimes heartbreaking novel that stretches over generations and illustrates the way these women’s choices affect their children as well. Bennett skillfully explores colorism, society, family connections, and how people with similar backgrounds can end up in such different places. (And while you’re at it, check out Boy, Snow, Bird by Helen Oyeyemi’s, which shares similar themes of passing, duality of racial identity, and how identities change over time.)

[If you read The Vanishing Half, I recommend listening to local artist McKinley Dixon’s new album, “For My Mama And Anyone Who Look Like Her”, but we also have McKinley Dixon on Audiotree Live available on Hoopla.]

The Signs and Their Modalities:

All 12 signs not only have designated elements based on the four seasons, but also a modality because each three-month-long season has a beginning, middle, and end. Modalities refer to the different ways that nature manifests in the different parts of each season. Here are some book recommendations for all three modalities.

CARDINAL (Aries, Cancer, Libra, Capricorn) – the cardinal modality marks the beginning of each season and the power of initiation which you can see in each sign.

“Cats the world over prefer to discover things they like on their own and rarely go for anything that’s been provided for them.”

FIXED (Leo, Scorpio, Aquarius, Taurus) – the fixed modality refers to the middle of the season and has the power of sustaining.

“And don’t make the mistake of calling us resilient. To not have been destroyed, to not have given up, to have survived, is no badge of honor. Would you call an attempted murder victim resilient?”

– There There by Tommy Orange

MUTABLE (Sagittarius, Pisces, Gemini, Virgo) – the mutable modality represents the end of each season and the power of change.

“All that you touch, You Change. All that you Change, Changes you. The only lasting truth is Change.”

– Parable of the Sower by Octavia E. Butler 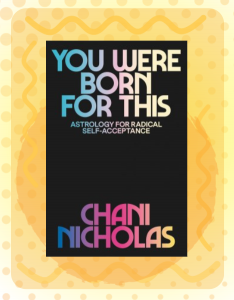 As always, I heavily relied on Chani Nicholas’ You Were Born for This when researching this blog post, but we also have many other titles that talk about astrology. Nicholas’ writing is easily accessible for both astrology newbies (like me) and veteran chart readers alike. If you want to learn more about your birth chart or try a hand at writing your own horoscopes, I highly recommend checking out a copy of this book.