May the Fourth be with You

Posted about 9 months ago by Robyn Webb
Posted in Book Reviews, Comics, Families, Movies, Reading Recommendations | Tagged with book recommendations, book recs, may the fourth be with you, reading suggestions, star wars
0
137
Share

“Truly wonderful, the mind of a child is.”

– Yoda, Episode 2: Attack of the Clones

Star Wars is a franchise that multiple generations have grown up with at this point. Whether your first was the original trilogy, the sequels, or the Rebels cartoon, there’s something for everyone!

And tomorrow, May 4th is Star Wars Day! (May the Fourth Be with You, get it? Eh, eh?) Do you have a stockpile of media and books to celebrate? If not, we’ve got you covered.

Join Chewie as he explores the island of Ahch-To and gets to know and learn to co-exist with the mischievous little creatures, Porgs.

Revisit iconic moments in the Star Wars saga or share them for the first time with your little one, through fun poems about different emotions.

Eleven action-packed star wars stories that are the perfect length for a read aloud session. Hear about Jedi Master Yoda, brave Rey, the little droid BB-8, and many other fun recognizable characters.

In this level 2 Easy Reader, “Who are the mysterious and dangerous bounty hunters? Meet Boba Fett and his fellow bounty hunters and learn all of their scary secrets”

In this cute and hilarious little comic book, “Vader–Sith Lord and leader of the Galactic Empire–now faces the trials, joys, and mood swings of raising his daughter Leia as she grows from a sweet little girl into a rebellious teenager.”

Middle School in space! Through journal entry comics, we follow Roan, who instead of getting into Pilot School, is invited to attend Jedi Academy.

All new stories from the Cartoon Network’s Clone Wars cartoon series. Fun and dynamic comic’s style with entertaining tales if heroism and villainy!

Poe, hand picked by General Leia Organa, sets off with a squadron on a secret mission that reveals background from before the Force Awakens.

In this juvenile fiction novel, Han Solo and Chewbacca go on an adventure to settle old debts (which, I’m sure will go smoothly). Set between A New Hope and The Empire Strikes Back, this book promises an action and hijinks packed story.

In this fantastically epic young adult novel, Gray tells a gripping story about loyalty, both to (and against) friends and the empire. Lost Stars follows two childhood friends turned lovers before ending up on opposite sides of the galactic war.

Star Wars: From A Certain Point of View

A celebration of the 40th year since Star Wars: Episode IV- A New Hope, this anthology contains stories told from the point of view of secondary characters in the original movie, breathing new life and vision into this story. From fantastic and varied authors such as: Nnedi Okorafor, Ken Liu, Daniel M. Lavery, Kelly Sue DeConnick, and Griffin McElroy! (See details below if you want a chance to win a copy of this book along with some other Star Wars goodies.)

Fate of the Jedi: Omen by Christie Golden

This series follows Luke Skywalker and his son, Ben, (yes! son!) as they go on various journeys after Han and Leia’s son turns to the dark side and goes on a reign of terror as a Sith Lord. A fun tie-in where you get to spend more time with some beloved and some new characters.

Non-Fiction & Behind the Scenes:

“Ever wanted to move things without touching them like a Jedi can? Or grow your own kyber crystal? Or maybe explode a balloon with a beam of energy, just like the Death Star? Now you can!”

Want to brush up on facts and names for some Star Wars trivia? Or marvel and the wild and imaginative character and monster designs? Then this Visual Encyclopedia is for you!

The World According to Star Wars by Cass R. Sunstein

“In this fun, erudite, and often moving book, Cass R. Sunstein explores the lessons of Star Wars as they relate to childhood, fathers, the Dark Side, rebellion, and redemption. As it turns out, Star Wars also has a lot to teach us about constitutional law, economics, and political uprisings.”

The Princess Diarist by Carrie Fisher

After discovering the journals she kept during the filming of the Star Wars Series, Carrie Fisher uses excerpts from these notebooks and recollections to paint an “intimate and revealing” tale of what happened on the sets of one of the most famous films of all time!

If you want even more Star Wars in your life, bring the kiddos to the Hull Street branch for some outdoor themed activities and/or hop on the Richmond Public Library’s Instagram account on 5/4/2021 to enter the chance to win a Star Wars Giveaway! 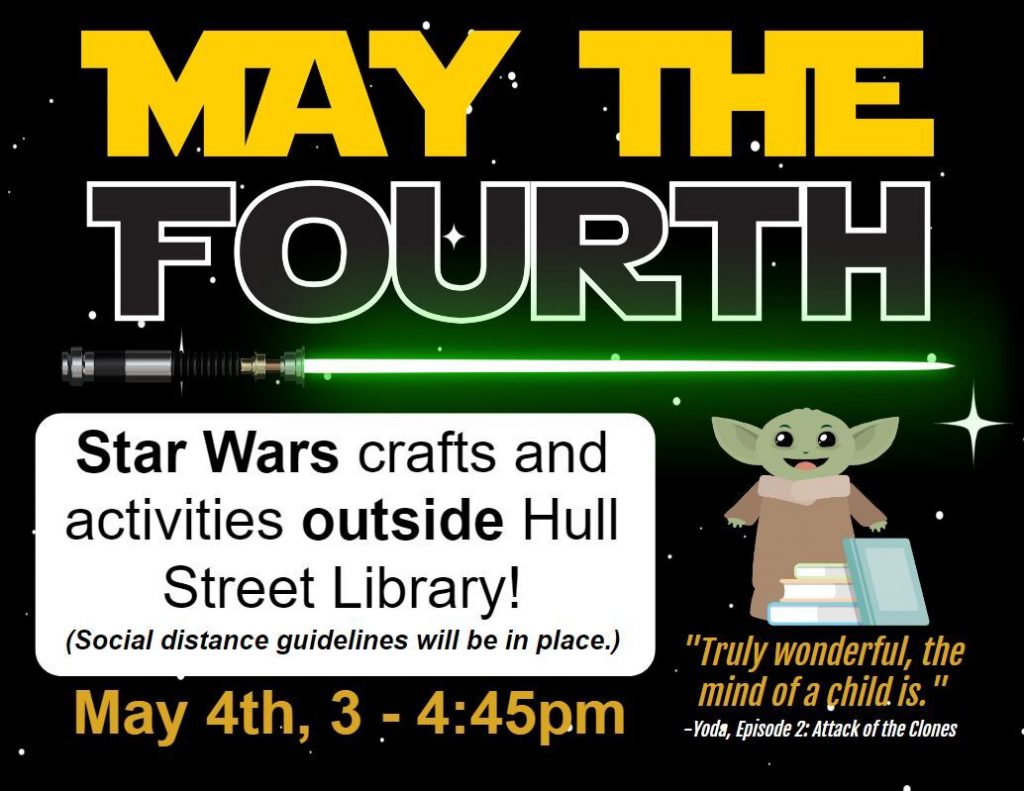