2021 Teen Reading Challenge: Books By or About a Senior Citizen

Readers, we are in the last quarter of our 2021 RPL Teen Reading Challenge! If you’ve made it this far, I have complete confidence that you will finish. You may be wondering what happened to my post for Prompt #9: something about 9/11. Well, I did write a blog post about 9/11, I just didn’t designate it a reading challenge post. This was for a few reasons. First, this year was the 20th anniversary of 9/11 and I wanted to write a blog post that would be on everyone’s radar (not just teens). Also, there just weren’t that many YA books written about 9/11. So, my list included both YA and adult titles. If you’re interested in seeing the list I put together, you can view that here. If you’d like to read my whole blog post, check it out.

Since, technically, I haven’t done a reading challenge post this month, I thought I’d go ahead post Prompt #10: something by or about a senior citizen. Why do I think this is an important prompt? Because it’s important to read about people that aren’t necessarily like you. This applies to people of different races, ethnicities, abilities, religions, genders, and ages. Doing this helps us build empathy and understanding. And, IMHO, helps to make the world that much better. Like the 9/11 prompt, it was also difficult to find YA books for Prompt #9. Nevertheless, I think I found some really good ones for you. 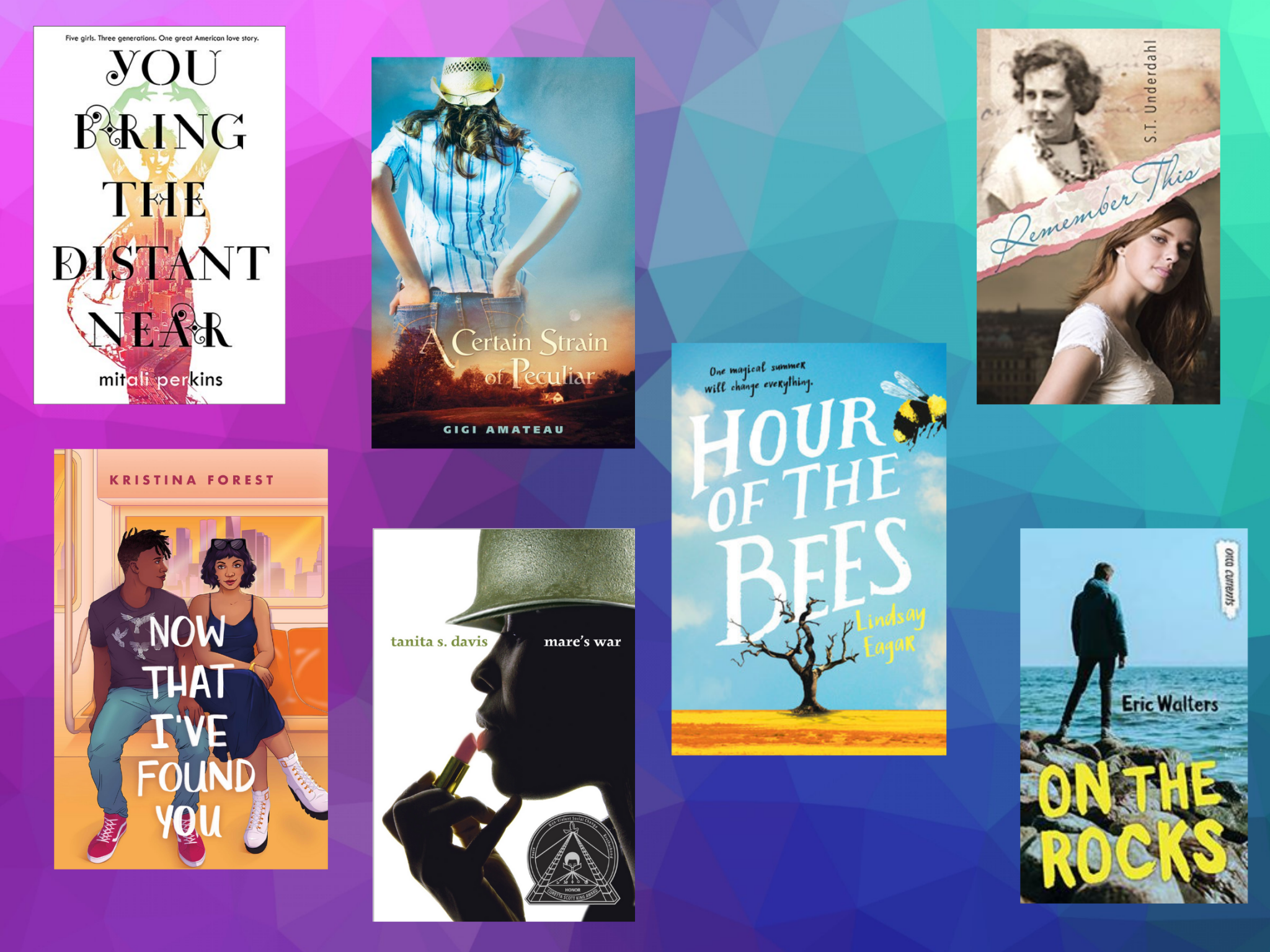 You Bring the Distant Near by Mitali Perkins

Five girls. Three generations. One great American love story. You Bring the Distant Near explores sisterhood, first loves, friendship, and the inheritance of culture–for better or worse. Ranee, worried that her children are losing their Indian culture; Sonia, wrapped up in a forbidden biracial love affair; Tara, seeking the limelight to hide her true self; Shanti, desperately trying to make peace in the family; Anna, fighting to preserve Bengal tigers and her Bengali identity–award-winning author Mitali Perkins weaves together a sweeping story of five women at once intimately relatable and yet entirely new.

Although this book spans several generations, Ranee is not your average grandmother. She is fierce and complicated and bent on keeping her family’s heritage alive.

Now That I’ve Found You by Kristina Forest

Following in the footsteps of her überfamous grandma, eighteen-year-old Evie Jones is poised to be Hollywood’s next big star. That is until a close friend’s betrayal leads to her being blacklisted . . . Fortunately, Evie knows just the thing to save her floundering career: a public appearance with America’s most beloved actress–her grandma Gigi, aka the Evelyn Conaway. The only problem? Gigi is a recluse who’s been out of the limelight for almost twenty years. Days before Evie plans to present her grandma with an honorary award in front of Hollywood’s elite, Gigi does the unthinkable: she disappears. With time running out and her comeback on the line, Evie reluctantly enlists the help of the last person to see Gigi before she vanished: Milo Williams, a cute musician Evie isn’t sure she can trust. As Evie and Milo conduct a wild manhunt across New York City, romance and adventure abound while Evie makes some surprising discoveries about her grandma–and herself.

Gigi is quite the character! She will take you on a wild ride but most importantly she will warm your heart.

A Certain Strain of Peculiar by Gigi Amateau

This is the last time Mary Harold will have a panic attack at school when kids call her “the grossest girl.” If Mom won’t move back to Alabama, her thirteen-year-old daughter will just have to drive herself 691 miles to Grandma Ayma’s farmhouse — and a whole new life. With Ayma’s loving support, Mary Harold is soon strong enough to help Bud, the Cherokee farm manager, wrangle the cows, and confident enough to stand up for his daughter, Dixie, a girl with a strain of peculiar that makes her whinny and stamp like a horse to keep the world at bay. Mary Harold still misses her mom, but has started to have dreams of the Black Warrior Forest that are offering clues. As she listens to their message, and to her own heart, she discovers how powerful and surprising the bonds of family can be.

Mary’s Grandma Ayma is like a giant hug, the smell of fresh baked cookies, and a warm blanket all rolled into one. She is the comfort you didn’t know you needed.

Meet Mare, a grandmother with flair and a fascinating past. Octavia and Tali are dreading the road trip their parents are forcing them to take with their grandmother over the summer. After all, Mare isn’t your typical grandmother. She drives a red sports car, wears stiletto shoes, flippy wigs, and push-up bras, and insists that she’s too young to be called Grandma. But somewhere on the road, Octavia and Tali discover there’s more to Mare than what you see. She was once a willful teenager who escaped her less-than-perfect life in the deep South and lied about her age to join the African American battalion of the Women’s Army Corps during World War II.

Hour of the Bees by Lindsay Eagar

While her friends are spending their summers having pool parties and sleepovers, twelve-year-old Carolina — Carol — is spending hers in the middle of the New Mexico desert, helping her parents move the grandfather she’s never met into a home for people with dementia. At first, Carol avoids prickly Grandpa Serge. But as the summer wears on and the heat bears down, Carol finds herself drawn to him, fascinated by the crazy stories he tells her about a healing tree, a green-glass lake, and the bees that will bring back the rain and end a hundred years of drought. As the thin line between magic and reality starts to blur, Carol must decide for herself what is possible — and what it means to be true to her roots.

Readers who dream that there’s something more out there will be enchanted by this captivating novel of family, renewal, and discovering the wonder of the world – especially through the eyes, and the stories, of a beloved grandfather.

Remember This by S.T. Underdahl

Remember this: I love you . . . Lucy Kellogg is looking forward to a great summer: her fearless best friend, Sukie, has talked her into trying out for the cheer team, and her witty and worldly grandmother, Nana Lucy, is coming to visit. But an errant toe touch jump during tryouts leads to public humiliation, and a controversial (but totally hot) boy from the past turns up, threatening Lucy’s friendship with Sukie. Meanwhile, things are changing with Nana Lucy. Now the woman who always told her, “Remember this: I love you,” is forgetting everything–even her granddaughter. A scary close call ultimately forces Lucy to face her worst fears-and, as one Lucy fades, another comes into her own . . .

Unfortunately, memory loss is something many older folks deal with. This book gives a realistic, tender portrayal of how it feels when dementia affects someone you love.

On the Rocks by Eric Walters

Fourteen-year-old Dylan is sent to live with his estranged grandfather, Angus. Basically strangers, the two avoid each other as best they can. One day Dylan discovers a young orca stranded high up on the rocky beach. Dylan runs to tell his grandfather. There’s nothing that can be done, says Angus. The sun is coming up, and soon the orca will die of exposure. But Dylan knows he has to try to save the whale. He collects towels to cover the delicate skin of the orca and begins transporting buckets of water from the ocean below to keep it hydrated. It’s grueling work, and it will be hours before the tide comes back in and the water is high enough for the orca to swim free. Angus is moved by his grandson’s determination and helps as best he can. They both desperately hope that soon the orca will be able to join its family, who have been calling out to it just offshore.

There’s nothing like an animal to bring two people together. Understanding the perspective of someone from an older generation can be hard, but this book shows how it can be done.

I hope you find a few books on this list that interest you. As I mentioned before, it was difficult to find YA books that featured senior citizens. If you have more to add to the list, please let me know!

Prompt 7 – Will Make You Laugh

Prompt 8 – Recommended by Someone You Admire

Check back next month for suggestions to fulfill Prompt 11, “Books about teen entrepreneurship.”