2021 Teen Reading Challenge: Something You’ve Always Wanted to Learn About

Well readers, we’ve made it to the end of the 2021 RPL Teen Reading Challenge! This post highlights Prompt #12, our last official prompt. Prompt #12 asks you to read a book (or other resource) that teaches you something you’ve always wanted to learn about. For obvious reasons, this was a difficult post to pull together. I wish I had the inside scoop on what all teens what to learn about. But, sadly, I don’t. So I used this as an opportunity to highlight some of the awesome YA nonfiction books that I  think often get overlooked.  These books are on a vast array of topics and I hope that one (or more of them) will interest you. If not, I encourage you to share with everyone what you chose to read for this prompt. You can comment on this blog post, or share on social media using #2021rplteenreadingchallenge. Now, on to some awesome YA nonfiction picks! 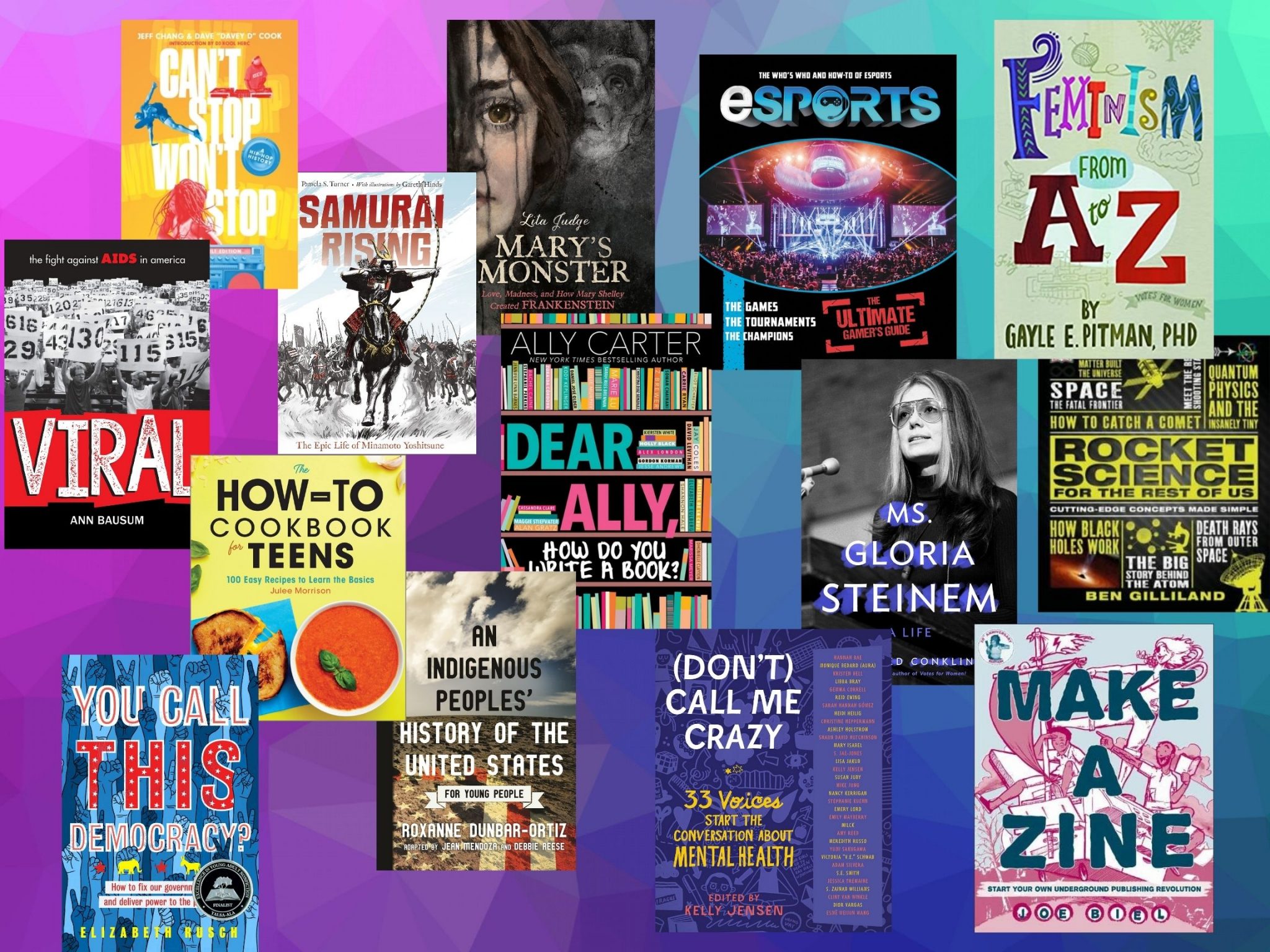 Hip hop is one of the most dominant and influential cultures in America, giving new voice to the younger generation. It defines a generation’s worldview. Exploring hip hop’s beginnings up to the present day, Jeff Chang and Dave “Davey D” Cook provide a provocative look into the new world that the hip hop generation has created.

Based on original interviews with DJs, b-boys, rappers, activists, and gang members, with unforgettable portraits of many of hip hop’s forebears, founders, mavericks, and present day icons, this book chronicles the epic events, ideas and the music that marked the hip hop generation’s rise.

Viral : the fight against AIDS in America by An Bausum

Thirty-five years ago, it was a modern-day, mysterious plague. Its earliest victims were mostly gay men, some of the most marginalized people in the country; at its peak in America, it killed tens of thousands of people. The losses were staggering, the science frightening, and the government’s inaction unforgivable. The AIDS Crisis fundamentally changed the fabric of the United States.

Viral presents the history of the AIDS crisis through the lens of the brave victims and activists who demanded action and literally fought for their lives. This compassionate but unflinching text explores everything from the disease’s origins and how it spread to the activism it inspired and how the world confronts HIV and AIDS today.

The How-to Cookbook for Teens : 100 Easy Recipes to Learn the Basics by Julee Morrison

Fire up your curiosity to try new foods and impress your family and friends. The How-To Cookbook for Teens will help you learn the basics of cooking and baking, while having fun creating incredible meals (and memories) from scratch.

The recipes in this cookbook for teens begin with the fundamentals, then take your skills to the next level. Start with perfect scrambled eggs, and then work your way up to fancy egg dishes like omelets and Cheesy Breakfast Bacon Muffins. There’s nothing like eating and sharing food you made yourself.

You Call This Democracy?: How to Fix Our Democracy and Deliver Power to the People by Elizabeth Rusch

The political landscape has never been so tumultuous: issues with the electoral college, gerrymandering, voter suppression, and a lack of representation in the polls and in our leadership have led to Americans of all ages asking, How did we get here?

The power to change lies with the citizens of this great country—especially teens! Rather than pointing fingers at people and political parties, You Call This Democracy? looks at flaws in the system—and offers a real way out of the mess we are in. Each chapter breaks down a different problem plaguing American democracy, exploring how it’s undemocratic, offering possible solutions (with examples of real-life teens who have already started working toward them), and suggesting ways to effect change—starting NOW!

Mary Shelley first began penning Frankenstein as part of a dare to write a ghost story, but the seeds of that story were planted long before that night. Mary, just nineteen years old at the time, had been living on her own for three years and had already lost a baby days after birth. She was deeply in love with famed poet Percy Bysshe Shelley, a mad man who both enthralled and terrified her, and her relationship with him was rife with scandal and ridicule. But rather than let it crush her, Mary fueled her grief, pain, and passion into a book that the world has still not forgotten 200 years later.

Dark, intense, and beautiful, this free-verse novel with over 300 pages of gorgeous black-and-white watercolor illustrations is a unique and unforgettable depiction of one of the greatest authors of all time.

Dear Ally, How Do You Write a Book? by Ally Carter

It’s going to be exactly what it sounds like–me, answering writing-related questions from REAL teenagers! Because I’ve learned through the years that a lot of you are extremely passionate about writing, and you ask some GREAT questions.

Plus, “how to write” books were really important for me when I was starting out, but there were none aimed at teenagers. This is my attempt to change that.

Going beyond the story of America as a country “discovered” by a few brave men in the “New World,” Indigenous human rights advocate Roxanne Dunbar-Ortiz reveals the roles that settler colonialism and policies of American Indian genocide played in forming our national identity.

eSports: The Ultimate Gamer’s Guide is an in-depth overview of professional gaming for everyone from casual gamers to hardcore fans. Learn the history, rules, leagues, and top players of the world’s biggest competitive games, including Dota 2, League of Legends, Counter-Strike, FIFA, Call of Duty, and many more.

The large and rapidly changing landscape of competitive gaming can seem overwhelming, but this guide will turn you into an expert. It covers everything you need to know about where to watch, how to get involved, and why eSports is the most exciting spectator sport around.

Throughout the years, Gloria Steinem is perhaps the single-most iconic figure associated with women’s rights, her name practically synonymous with the word “feminism.”

Documenting everything from her boundary-pushing journalistic career to the foundation of Ms. magazine to being awarded the 2013 Presidential Medal of Freedom, Winifred Conkling’s Ms. Gloria Steinem: A Life is a meticulously researched YA biography that is sure to satisfy even the most voracious of aspiring glass-ceiling smashers.

Feminism from A to Z by Gayle E. Pitman

Written by the author of the Stonewall Award-winning book, This Day in June, Feminism From A to Z is an alphabetical primer on feminism for teen girls. Each chapter examines a topic that offers call-to-action exercises incorporated into each lesson. Together, the chapters take a look at history and current events through the lens of feminist theory and introduce an inclusive and wide range of feminist thoughts and perspectives. Includes an introduction to readers on how to use the book and an alphabetical list of ways to take feminist action.

Rocket Science for the Rest of Us: Cutting-Edge Concepts Made Simple by Ben Gilliland

Want to understand black holes, antimatter, physics, and space exploration? Looking for a common sense guide to quantum physics that you can actually understand? Rocket Science for the Rest of Us is the book you’re looking for! Get a grip on even the most mysterious and complex sciences with Ben Gilliland’s guide to dark matter, exo-planets, Planck time, earth sciences, and more. You’ll hear yourself saying, “I get it now!” again and again as you explore the fun graphics and clear explanations in Rocket Science for the Rest of Us. Whether you want to impress your friends with your knowledge of quantum physics, finally know what a black hole actually is, or just learn more about the universe that’s all around us, Rocket Science for the Rest of Us breaks it all down so science and physics are easy to understand. You’re not a rocket scientist? So what! That doesn’t mean you can’t understand it!

Make a Zine!: Start Your Own Underground Publishing Revolution by Joe Biel

In this new edition of Microcosm’s popular DIY guide to zine-making, Joe Biel updates the information provided in the first edition (edited by Biel and the late and great Bill Brent) to address zine making in today’s digital and social-media-obsessed world. Covering all the bases for beginners, Make a Zine! hits on more advanced topics like Creative Commons licenses, legality, and sustainability.

Illustrated by an army of notable and soon-to-be-notable artists and cartoonists, Make a Zine! also takes a look at the burgeoning indie comix scene, with a solid and comprehensive chapter by punk illustrator Fly (Slug and Lettuce, Peops). Part history lesson, part how-to guide, Make a Zine! is a call to arms, an ecstatic, positive rally cry in the face of TV show book clubs and bestsellers by celebrity chefs. As says Biel in the book’s intro, “Let’s go!”

There you have it! This is officially the end of the 2021 RPL Teen Reading Challenge. I hope you have enjoyed it as much as I have. Happy reading!

Prompt 7 – Will Make You Laugh

Prompt 8 – Recommended by Someone You Admire

Prompt 10 – By or About a Senior Citizen